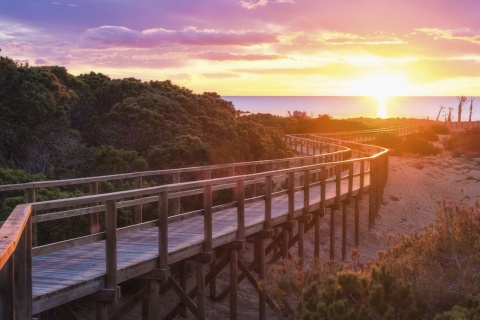 The town of Santa Pola in the region of Alicante, traditionally a fishing town, is located in an ecologically diverse area, on the shore of the Mediterranean.

This section of the Costa Blanca presents visitors with excellent beaches with views to the salt marshes, the sierra and cape Santa Pola, a paradise for nature lovers. A superb accommodation and recreational infrastructure is paired with the region's privileged climate. This makes it quite enjoyable to take a walk around town or on the promenade and to enjoy water sports.

Located a mere twenty kilometres away from Alicante, the port of Santa Pola was already known during Roman times. Nowadays, the city preserves its fishing-town charm, which has not been undermined by the modern infrastructure devoted to the enjoyment of its Mediterranean climate and beaches. White coves and beaches, great for scuba diving and windsurfing, are some of the treasures of this coast. The beaches of Levante, Varadero and Gran Playa, as well as the coves of Santiago Bernabeu, are highly recommended.The PortSanta Pola was the port of Elche during Roman times, when it was called Portus Illicitanus. The archaeological remains from this period are located in what is now the new suburb of Ensanche de Poniente. An ancient factory of salted fish and meat from the 4th century B.C., walls, rooms from the commercial area and a Roman residence are all part of this compound. In Casa del Palmeral, it is possible to see the arrangement of rooms around a courtyard at a stately country house from the 4th century B.C.The 21st century has brought a modern infrastructure to the port, facilitating the berthing of sporting and fishing vessels, as well as the loading of salt. The fish market, the stands of the Market of Abastos and Casa del Mar (the Sea House) remind visitors that he of she is at a busy fishing port. There, you can board a vessel that will take you to the nearby island of Tabarca, where there is a walled precinct and a diverse Marine Reserve. In the town centre of Santa Pola there is a fortress - the castle built under order of Philip II to repel attacks by pirates and privateers. Its square floor-plan is guarded by two bastions and two towers, which lead to a parade ground, an underground reservoir and a chapel. This magnificent site is now the town's Cultural Centre, home to: the Sea Museum, the Fishing Museum, the Municipal Exhibition Hall and the Virgen de Loreto Chapel. This was also the site of the Municipal Aquarium, which has now moved to its own facilities where you can see species like the starry smoothhound, triggerfish, loggerhead turtle, and many others.The defence system, which dates back to the 16th century, continues with another three watchtowers: one erected on the salt mines (Tamarit tower), one on the south-eastern area of the Sierra (Escaletes tower) and the last, the Atalayola tower, on top of which the present lighthouse was built. A walk around this town will lead you to lively squares, such as Glorieta and to natural viewing points like the one in Plaza del Calvario. From this spot you will enjoy an unbeatable panoramic view of Santa Pola Bay and its promenade, an excellent place to take a stroll on the shores of the Mediterranean. The OutskirtsThe relief of the region of Baix Vinalopò, in which Santa Pola is located, is marked by the Sierra of Baix Vinalopò, which stretches on to the sea. Cliffs frame a good number of the local beaches, moving dunes and lagoons (albufera), in a wetland where salt marshes stretch out around freshwater pools. The Santa Pola Salt Marshes Nature Reserve is the old wetland of Elche, where the salt mines where installed. Local fauna and flora have adapted to these special conditions of humidity and high salinity. Thus, you can find Flamingo colonies, as well as rare Marbled Teals (quite difficult to spot in Europe). In the swamp areas you can see a lot of seaweed. The Cape of Santa Pola completes the landscape that stretches around the city. In view of the marine diversity of the Costa Blanca, it is not hard to guess what the most common product is on the recipes from Alicante. Among the exquisite seafood of this region, it is worth highlighting the excellent taste of shrimp, Norway lobster and Red prawns. Rice, the ever-present dish of this region, is prepared "a banda" (cooked with fish and served with ali-oli), "black" (cooked in the squid's own ink) and as "paella de marisco" (seafood rice). Among the different fish stews, there are delicious local recipes such as the "blanquillo de rape" (monkfish), cuttlefish stew and fish casserole. Gilt-head seabream and sea-bass are prepared in the oven, while the smaller fish are fried in a generous amount of olive oil. And to honour its tradition as a salt mining area, salted roe, tuna, cod and bonito are wonderful.Designation of OriginTo finish sampling local cuisine, nothing better than handmade biscuits, puff pastries filled with sweet pumpkin preserves or ice cream, in particular mantecado-flavoured ice cream. But you cannot forget the products with the label Designation of Origin - Alicante, such as the Loquats from Callosa de Ensarriá, the cherries from the Mountain of Alicante, the fine, bagged grapes of Vinalopò and the wine from Alicante.These succulent dishes are also typical of other coastal towns of Alicante, such as Torrevieja, Guardamar del Segura and Alicante. The capital of the province exhibits a splendid coastline, dotted with beaches, in addition to its interesting historic quarter, its marina and its golf courses. The Bonfires of San Juan, a celebration of International Tourist Interest are a great opportunity to get to know the city at its best. Inland, Sax, Elda, Novelda, Crevillente and Elche make up an interesting cultural route. Medieval Castles, precious historic quarters and beautiful churches are part of the appeal of these towns. Elche is perhaps the most representative of all the wealth that the province amasses. The capital of the region of Baix Vinalopò has a rich historic quarter, in which two UNESCO World Heritage Sites can be found: the Palm Tree Grove, of Muslim origin and the celebrations of the Mystery, which is of International Tourist Interest. 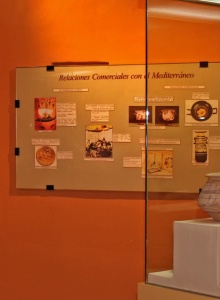