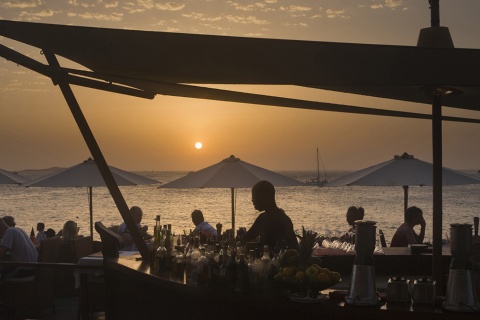 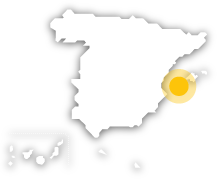 The beautiful town of Sant Antoni de Portmany is located in the island of Ibiza which, along with Formentera, make up the Archipelago of Pitiusas.

On the shore of the Sant Antoni Bay, this Balearic town has an interesting historic quarter and beautiful, crystal-clear waters. The variety of accommodations and leisure activities it offers make it one of the most attractive tourist destinations in the island. Taking a quiet walk through the coves and pinewoods is an alternative that reflects the other side of a town that is famous for its exciting night life.

The coastline of Sant Antoni has numerous coves and beaches that emerge among rocks and pinewoods. The crystal, tranquil waters are suitable for the little ones to swim, as well as for scuba-diving. The rough shoreline has vast sands, as well as beautiful, hidden coves and other even more remote ones. Some of these coves have all kinds of services available to visitors, while the others are remarkable precisely because they are peaceful and removed, enjoying also a gorgeous scenery.Walks, Routes and TrailsIn addition to water sports, Sant Antoni offers the possibility of getting to know the spectacular natural surroundings by taking a number of routes, such as those included in the Falcon Routes. The viewing point of Ca´n Bernadet, with gorgeous views of the bay, is an excellent goal. The razor-sharp cliffs of Cap Nunó plunge to the sea near Salada Cove, a traditional fishing spot.A relaxing day at the beach can end with a fabulous, lively night at any of the numerous leisure establishments. Lining the streets of the city centre, the promenade and the bay, numerous restaurants, terraces, bars and nightclubs await. Some of the most fashionable bars are located on the shore, like the famous “Café del Mar” ("Sea Café"), place where one can see the most gorgeous sunsets in the whole island.Cultural HeritageThe origin of Sant Antoni de Portmany dates back to prehistoric times, as is evidenced by the many artefacts found in the area, such as bronze axes and early cave paintings. Named Portus Magnus by the Romans and Portumany by the Arabs, the town was forged as an urban centre after the Reconquest by King Jaume I.In the 14th century, the church of Sant Antoni was built and around it, the city began to emerge. The fortification of this church and of most churches in Ibiza, took place in the 16th century to repel the attacks of pirates and privateers. To ensure its strategic position, the city erected a belt of large towers around itself and along the coast in the 17th century. Surrounded by impressive cliffs, the fortress of Towers d´en Lluc rises. Monuments that can be admired at different spots in Sant Antoni.Sant Antoni de Portmany is the second most populated city in Ibiza and it gathers the parishes of Santa Agnès de Corona, Sant Mateu d´Albarca and San Rafael de Forca. These are the location of the religious temples of the area. The church of Sant Antoni de Portmany dates back to the 14th century and it is remarkable because of the polygonal floor-plan of its tower. In Santa Agnès there is an underground chapel, very well preserved, built inside a cave. The church of Sant Rafael enjoys wonderful views of the islands of Ibiza and Formentera. The church of Sant Mateu has a magnificent atrium with a triple arcade and beautifully proportioned chapels.Food and WineIn addition to wide repertoire of international cuisine, Sant Antoni de Portmany prepares one delicious dish: ensalada pagesa (country salad). It consists of potato slices with onion, roasted red peppers and aubergine. Among the fish, the baked grouper is excellent, as for dessert, "flaó", a cheesecake with egg and mint. All these dishes go very well with some wine with the label Designation of Origin - Binissalem-Mallorca.The small dimensions of the island of Ibiza make it possible to cover it without much difficulty. Santa Eulària des Riu is an excellent starting point, since there you can visit, in addition to the beaches, the ruins of a Roman bridge and a necropolis, as well as the fortified church that rises above Puig de Missa. Portinatx and old fishing town, nowadays is an excellent destination because of its beautiful steep coast. Ibiza, the capital of the island, combines its important cultural heritage with its environmental diversity, both declared World Heritage Site by UNESCO. The monumental area of Dalt Villa, the necropolis Es Puig des Molins and the beautiful seabed by the coves, deserve special attention.