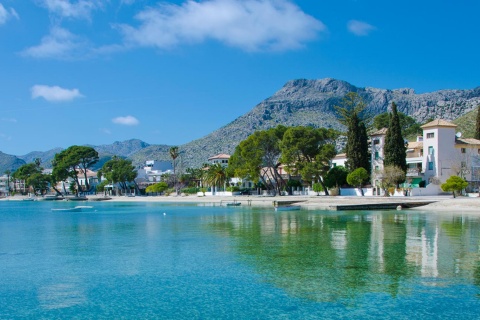 View of the port of Pollença.

The northernmost spurs of Sierra de Tramuntana are the backdrop of the Majorcan town of Pollença. Widely known for its lively port and crystal-clear bay, the town has a medieval historic quarter that sits only a few kilometres away from the Mediterranean sea.

This town, under the shade of the mountains of Puig de Pollença and Calvari, has managed to preserve intact its personality, despite being only steps away from the bustle of the beach.

Pollença, the Roman Pollentia, sits among mountainous outlines and pinewoods. The history of this town begins in prehistoric times, later on living under the rule of Romans, Visigoths and Moors, until King Jaume I incorporated it to the Christian kingdoms in the 13th century. The following centuries watched as the coastal towns built fortified walls and towers around themselves, to repel pirate and privateer attacks. Today, Pollença is a quiet seaside town of irregular layout, its houses roofed with Arab tiles. Stretched along the foothill of the mountain, a multitude of streets creep up, offering numerous spots from which one can have amazing panoramic views of the whole place.Cobbled streets lead to the most emblematic monuments, including the church of Nostra Senyora del Roser and the parish of Our Lady of the Angels. In the first of these religious constructions, a Gothic carving of the Virgin is preserved, along with a Baroque reredos from the seventeenth century and an eighteenth-century organ. The parish, on the other hand, was founded by the Templar knights in the 14th century on top of an ancient Greek-Roman temple. Later on it came under the jurisdiction of the Order of the Hospitallers of San Juan de Malta. Defensive elements from the former building can be seen in the present belltower.The Way of the Easter CrossPart of the layout of Pollença is taken up by the slope of Mount Calvari, the site of a hermitage that can be accessed by climbing a stairway with 365 steps. The Way of the Cross held in Good Friday covers this journey lined with centenary crosses more than three metres high. In the parish, the thirteenth-century Gothic image of the Virgin at the Foot of the Cross is venerated. From the miradors in this mountain visitors can enjoy the most impressive views of the urban centre and the outskirts. From here it is possible to reach a fourth-century Roman bridge that crosses the torrent of Sant Jordi.Another interesting activity will be a visit to the Museum of Pollença, where you will find collections of Gothic art, contemporary art and ceramics, as well as a room devoted to artist Atilio Boveri. Also, they have an attractive "mandala" —a diagram used for Lama meditation— which is a masterpiece of Tibetan art.The privileged location of Pollença, between the sea and the mountains, makes it possible for visitors to enjoy a myriad of outdoor activities. These include hiking, golf, horse riding (both inland and along the shore) and water sports at the Pollença Bay. This diverse geography is a great influence on the island's cuisine. Majorcan soups, made with meat and vegetables and "tumbet" (a stew made with potatoes, fried peppers, aubergine and tomato sauce) are some of the starters. "Sobrasada" (a kind of pork and paprika spread) and cheese with the label Designation of Origin (the seal of quality and origin given in Spain to exceptional products from specific regions), are served with grilled pork and simple —yet delicious— pieces of bread with olive oil and tomato. Of all desserts, the famous "ensaimada" will definitely delight those with a sweet tooth.The Majorcan coastCape Formentor, Cape Pinar, Alcúdia and the port are a must for anyone who wishes to enjoy the spectacular scenery of the island. The typical landscape of this area has pinewoods that go all the way to the beach and crystal-clear waters. Extensive beaches and hidden coves are excellent by day and night, always enjoying pleasant temperatures. The medieval village of Alcúdia, on the other hand, has the beautiful church of Sant Jaume and a stone-carved Roman theatre, among other monuments. If, in addition to the coast, the traveller wishes to become acquainted with the inland towns of Sierra de Tramuntana, a visit to Sa Pobla, Inca, or Benissalem will be very satisfying. In the latter, palatial residences and mansions from the 15th century speak of the wealth of this wine-growing region. This is the place where the wines with the label Designation of Origin - Benissalem-Mallorca are produced, like the famous red wines of Manto Negro and the young white and rose wines. This tradition is also present in Inca, where you must visit the "cellers", or cellar-restaurants. In addition to the wines, this land, gained by filling the marshes that used to be there, is now used to grow potatoes, beans and vegetables used in delicious, traditional recipes. The church of Santa Maria La Mayor is also worth a visit.The wetlands in S´Albufera de Mallorca Nature Reserve will also surpass visitors. The torrents of Muro and Sant Miquel provide water to this marshland, as well as to the natural and artificial irrigation channels. Although reeds are predominant all around the lagoon, the dunes are covered with pine trees and other species, such as juniper trees, orchids and other endemic plants. Some vertebrates are present in this habitat, like tortoises, weasels and marten. However, above all, these wetlands are the habitat of numerous bird species, like the marsh harrier, the purple heron, the black-winged stilt and the moustached warbler, whose most important colony in Western Europe is found in these marshes. With the coming of winter, up to 74 different species of anatidae (ducks), laridae (gulls), etc.