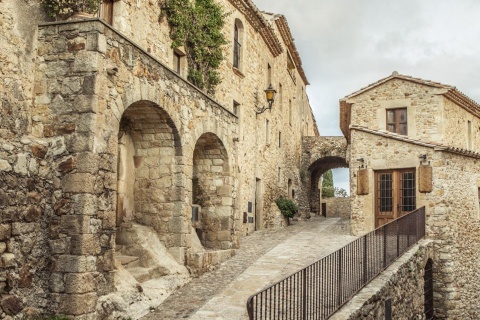 A few kilometres from the Mediterranean Sea, right on the Costa Brava, lie the medieval streets of Pals. The county of Baix Empordà in the province of Girona has in this town a lovely old quarter, declared a Historic Artistic Site.

In the Gothic quarter of Pals, pretty cobbled streets flanked by aristocratic houses await you. Pals beach completes the visit to the walled town. At any of these points, you can try the area's cuisine, based on products from both the sea and of the mountains.

The Costa Brava, the wild coast of the province of Girona, has a medieval town a few kilometres from where it meets the sea. Its historic centre stands on a hill surrounded by plains, which were originally marshland. You have to go back to the 9th century - the period to which its castle belongs - to find the first written documents mentioning this town. Continuous warlike confrontations have meant that over the centuries only the Keep of this defensive construction has been preserved. It is a circular Romanesque tower built between the 11th and 13th centuries. The 15-metre tower stands on a natural rock platform in which many Visigothic tombs can be found. During the 15th century it was used as a belltower, which is why it is known as the Torre de las Horas (Tower of the Hours). Gothic quarter Nowadays, the site of the castle is occupied by the house of the Pi i Figueras family, promoters of the restoration of the Gothic Quarter of Pals. Of modern construction, this house maintains the same architectural features as the rest of the town. Cobbled streets interrupted by semicircular arches, façades with pointed arched windows and stone balconies are among Pals' distinctive features. The wall is another element that takes the traveller back to the Middle Ages. Four square towers remain standing today, although they date from the 12th century. They are towers with their own names, like Ramonet, Rom, Xinel·lo and Hospital. Other points of interest are the Josep Pla viewpoint, the Plaza Mayor, the tombs in the Calle Mayor and the church of Sant Pere. The writer from Palafrugell gives his name to one of the natural watchtowers, from where you can make out the fields of Empordà and the Medes Islands. Gothic arches and medieval tombs are the other landmarks you find on the way. Some of the stone blocks from the castle were used in the 10th century to build the church of Sant Pere. In its final structure you can make out the Romanesque base, the Gothic apse and nave and the Baroque portico and belltower. The best way to tour Pals is to lose yourself in its medieval streets, but before that it is worth visiting a 15th century fortified house, home to the Underwater Archaeology Museum. Among other curiosities, you can get to know the history of Catalan wines and cavas thanks to the permanent exhibition it has on display. Costa Brava On the edge of the town lies another part of the municipality of Pals, the Masos de Pals, formerly a set of Catalan farmhouses which today house a thriving urban centre. And, on the coast, Pals beach - more than four kilometres with clear water where travellers can enjoy the benign Mediterranean climate and all the leisure opportunities offered by the Costa Brava. Golf courses, water sports and visits to the Illes Medes Natural Park are just some of these. Pals also provides an excellent opportunity to approach the cuisine of Baix Empordà, which brings together products from land and sea. Broad beans and peas from the fields appear together with "esqueixadas" (cod salad) "escalivadas" (cold roast aubergine, onion and peppers) and chicken or rabbit stews with seafood. For their part, prawns, sea bass and gilt-head bream are prepared in numerous ways. Among the desserts, fruit is very important (strawberries, peaches, melons, water melons, oranges...), and in summer these are turned into ice-creams and sorbets. 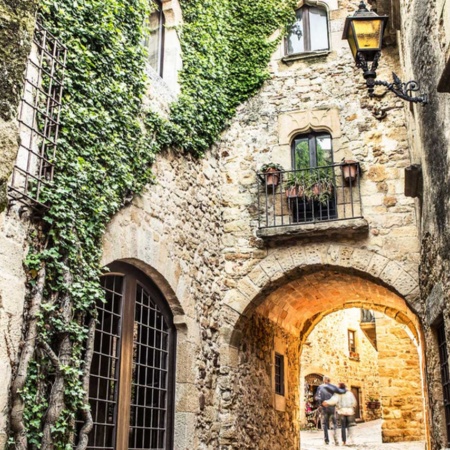