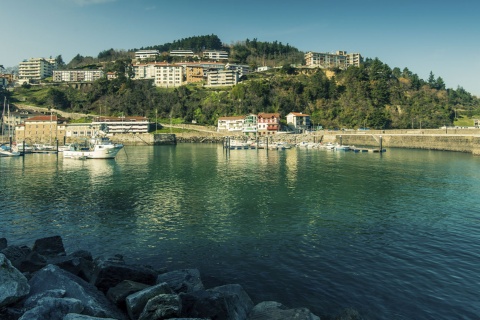 Ondarroa in Bizkaia (the Basque Country)

Ondarroa is a fishing and canning port. At the top of town, the church of Santa María and the Likona Tower are its chief characteristics.

To the east of Ondarroa, the beach of Saturraran marks the boundary of the coast of Vizcaya with that of Guipúzcoa. The historic quarter is one of its prettiest places. It has an unmistakably medieval and seafaring atmosphere, with steep, narrow streets. Here you will find the Likona Tower, from the 15th century, a typical border structure. Standing nearby is the marvellous church of Santa María (1462) built on the rock. The old City Hall, which is another place of interest, has a Tuscan façade very different to the rest of the buildings in town.

Climbing quite a steep hill takes you to the church of Nuestra Señora de la Antigua. Standing at these heights offers views of great beauty, colour and magnificence. The structure dates from the 12th century, although it was rebuilt in 1750. On the way to Nuestra Señora de la Antigua there are also two beautiful hermitages: San Juan and Santa Clara, which can only be reached on foot.