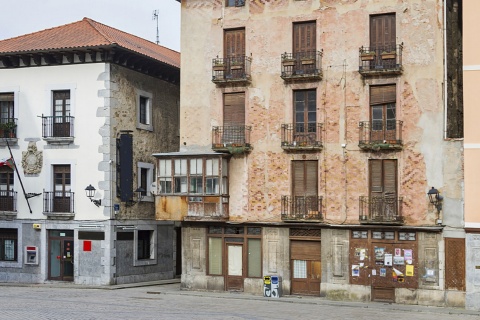 This town in the Vizcaya region is on the Pilgrim's Road to Santiago de Compostela, which runs along the Basque coast towards the holy city.

That fact that it formed part of the Pilgrim's Road to Santiago de Compostela gave Markina-Xemein a medieval layout which is still present today. Founded in 1355 by Don Tello, illegitimate brother of Pedro I “the Cruel”, it boasts a walled town centre.

Parallel streets joined by alleys constitutes the urban design of this city, where you will find beautiful examples of architecture. The Basque-Gothic style of the 16th century can be admired in the three naves and powerful columns of the church of Santa María. Towers like those of Barroeta or Mugartegui allow the visitor to see Renaissance and baroque palaces, a testimony to its magnificent past. Particulary striking is the hermitage of San Miguel de Arretxinaga, with a hexagonal plan and a megalith on its altar. The cemetery of Markina-Xemein is another must, since it is an excellent example of enlightened thought. Its Neoclassic design combines both Greek and Egyptian elements. During Carnival is a good time to visit this town and learn more about its culture and customs. One of them is its excellent cuisine, made with ingredients picked fresh from the sea. Tuna and potato stew, baby squid in their own ink or kokotxas in green sauce are just some of the more famous recipes of the region.