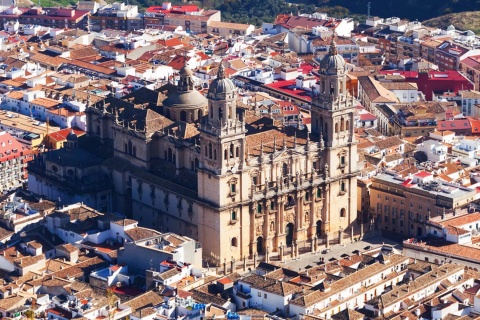 This provincial capital boasts the largest number of protected spaces and castles and fortresses in Spain, and stands in a setting of olive groves.

Its origin as a centre for Arab caravans, its importance as a stronghold on the Castilian-Muslim frontier during the Reconquest, and its current role as a leading olive oil producer –earning it the designation of "Olive Oil Capital of the World"– all make this a place not to be missed.

The oldest part of Jaén is dominated by the Arab fortress that stands atop the Santa Catalina ridge. From this height visitors can enjoy one of the best views of the city and across the Guadalquivir valley. Santa Catalina castle is home to an interesting Visitor Centre with information about its history. The Parador hotel built alongside the fortified enclosure is one of the best options for and an overnight stay during your visit. Some of the oldest neighbourhoods in this Andalusian city can be found clustered around its base, radiating out from the churches of Magdalena, San Juan and San Ildefonso. But the main axis of the historic centre of Jaén is the Santa Iglesia Cathedral. This is a monumental Renaissance construction dating from the 16th century, which stands out from the profusion of whitewashed houses. The chapter room, the main chapel, the choir and the sacristy are all fine examples of the art of this period.

The streets near the church are some of the best places to sample the local gastronomy. Extra virgin olive oil –which can be acquired in any of three oil presses in the capital– is always present in one form or another on the tables of Jaén. Starters include pipirrana salad (with peppers, tomato and garlic), fried aubergines with honey, snails in broth, and local broad beans with eggs. Recommended dishes for the second course include kid fried with garlic, stewed cod, marinated pork loin and game. And to end the meal, the best idea is to try some of the sweet pastries filled with walnuts, or "tocinos de cielo" (a dessert made with only egg yolk and sugar) with figs, or any of the delicious sweets that can be acquired in the convents throughout the city. We continue our route by visiting some examples of the civil architecture of Jaén. These include such gems as the palaces of San Francisco –today the Provincial Government building– and Villadompardo. Plateresque façades and colonnaded courtyard with Renaissance staircases are some of the most common features in this type of construction. The Arab baths are considered a National Monument, and still conserve their ceilings with star-shaped windows, horseshoe arches and delicate capitals. The Arab Baths Cultural Centre houses the Museum of Art and Popular Traditions and the International Museum of Naïf Art and offers a varied programme of exhibitions, concerts, lectures and demonstrations. Key areas to visit in the more modern part of the city include the squares of Plaza de San Francisco, Plaza de la Constitución and Plaza de las Batallas. Broad avenues lead to the La Victoria park and the Jaén Museum, which contains one of the most important collections of Iberian art in Spain. It also has Roman and Arab pieces and pictorial works from the last three centuries.

Routes through the province

The cultural and scenic importance of Jaén mean that this province offers a wide variety of itineraries. The Renaissance Route takes in the towns of Úbeda and Baeza in the La Loma area. Both cities have been declared historic and artistic sites due to their important Renaissance legacy. Another route takes you through Jaén's nature reserves. In Cazorla, the Segura y las Villas reserve is the site of the source of the Guadalquivir river, among rock beds and forests. Hornos de Segura and Segura de la Sierra both have an interesting monumental heritage. The Mediterranean forests of the Sierra de Andújar nature reserve are the setting for towns such as Andújar. In the south of the province lies the Sierra Mágina nature reserve, where you'll find villages like Bedmar, Cambil and Huelma. And the fourth nature reserve is Despeñaperros, the natural boundary between the autonomous regions of Castile-La Mancha and Andalusia. To the south of the capital are the villages in the segment of the Route of the Caliphate that runs through the Jaén region. This itinerary links the cities of Cordoba and Granada, and here province includes places such as Alcaudete, Martos and Alcalá la Real. Castles with Arab origins, Gothic and Mudéjar churches and Renaissance palaces are some of the points of interest on this route. And all set amid mountains and olive groves. Now all that remains is to visit the north of the province and the towns of Baños de la Encina, Linares and Vilches. Here popular architecture intermingles with gems of the Renaissance and Baroque art that can be found in abundance throughout Andalusia. Museum of Art and Popular Traditions 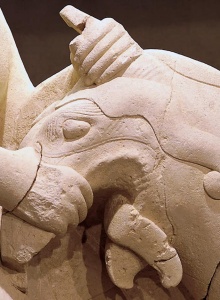 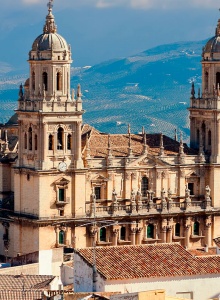