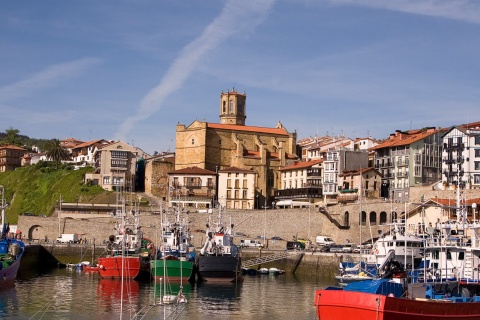 Panoramic view of the Port of Getaria (Gipuzkoa, the Basque Country) with the church of San Salvador in the background

Getaria is located on the coast of Guipuzcoa. It’s a quaint fishing village and the birthplace of distinguished figures like Juan Sebastián Elcano and Cristóbal Balenciaga.

Getaria is 30 kilometres west of San Sebastian. During the Middle Ages and later, when harpoons were still thrown by hand, the village’s inhabitants hunted whales, as its coat of arms shows. The route through the village is very picturesque, with its mediaeval houses, the harbour and the walk to Getaria lighthouse. Home to the 15-century Gothic Church of San Salvador, it is also a place of cultural interest. It is of great historic importance, as it was the site of the General Council of 1397, which declared Guipuzcoa a province.

Getaria harbour has an infrastructure ideal for fishing and tourism. 'The Getaria mouse' is a small peninsula that ends at the mount of San Anton and took its name from its peculiar shape. The village is joined to the 'mouse' by a dyke, which is actually two quays of the fishing harbour. A narrow road climbs to the top of the mount of San Anton, from where there is a magnificent view of the mountains and the sea. But if Getaria is famous for anything, it’s for its txakolí of undoubted quality, which has given rise to the Getariako Txakolina Denomination of Origin. 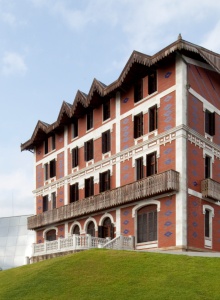