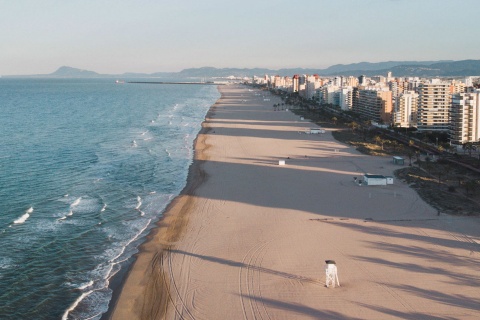 Gandía, capital of the county of La Safor, is set in unusual landscape between the mountains inland and the Mediterranean Sea.

An extensive strip of sand almost five kilometres long runs along the coast of this area, offering a wide range of tourist infrastructures and services, making it one of the most attractive destinations on the Valencian coast. A ducal city, Gandía has an illustrious past, as can be appreciated in its historic part, where the mark of Duke Juan de Borja remains in the form of important buildings like the Ducal Palace, the Collegiate Church and the Old University. Its festivals, some of them declared of tourist interest, and its typically Valencian cuisine are some of the other attractions offered by this town.

Gandía is right on the Costa de Valencia, in a beautiful section of the Mediterranean coast where the mountain landscape reaches almost down to the sea. The good climate this Valencian city enjoys all year and the quality of its beaches attract those looking for sun, sea and the chance to practice all kinds of sports. In the harbour area, a deep-rooted seafaring tradition exists alongside the most modern facilities, among them a sailing club, which will delight all devotees of windsurfing, sailing or diving. And, on both sides of the harbour, there are almost five kilometres of coast where magnificent beaches of fine, golden sand give way to one another. A long and busy promenade marks the limit of the North Beach, situated in an easily accessible area and provided with all kinds of services, including places to hire sailing equipment. Hotels, restaurants, discotheques and terraces give the place a great atmosphere, especially on summer nights. Those looking for a more intimate environment should go to the most northerly part of the coast, where, surrounded by dunes, lies the quiet nudist beach of L’Ahuir, with about two kilometres of sand. Two the south of the harbour are another two beaches, Venecia and Rafalcaid. Surrounded by a succession of small dunes, both allow you to enjoy a refreshing swim in a beautiful natural setting.

The historic centre of Gandía

But, if Gandía's coast offers many charms, its historic centre has no fewer. The noble buildings that emerge at every step reflect the splendid past of this ducal city, a title obtained thanks to Alexander VI, the Borja pope. From the 15th and 16th centuries onwards, the city developed an intense court life at the same time as flourishing economically and culturally, as the creation of Gandía university demonstrates. Beside the course of the River Serpis, the Ducal Palace stands on the remains of a large old house of Arab origin. Built between the 14th and 15th centuries, it has a clear Italianate influence. The collegiate church of Santa María is another of Gandía's symbolic buildings. Its construction, faithful to Gothic rules, was carried out between 1250 and 1520. In it, the Door of the Apostles which originally had carvings by Damià Forment, is outstanding. The tour continues to the convent of Santa Clara, the hermitage of Santa Ana, the city hall and the hospital of San Marcos. In the latter building is the Archaeological Museum, where the area's important prehistoric finds are brought together.

Gandía's most typical speciality is "fideuà", a dish made in the same way as paella, but with noodles instead of rice. You can also taste recipes that have rice, as the main ingredient, cooked in a variety of ways: "a banda" (cooked in fish stock and served with garlic sauce), "arroz negro" (with squid ink) or the famous paella. For its part, fish is prepared in the oven, stewed or fried. To finish with, there is nothing better than the emblematic orange, either fresh or made into juice. "Horchata" (soft drink made of tiger nuts) and wines from Valencia and Utiel-Requena are drinks that have their own denomination of origin. As for festivals in Gandía, the most outstanding are the Fallas, which are held from 15 to 19 March, and Easter, between March and April, both declared of Tourist Interest. The festivals of the patron saint, in honour of San Francisco de Borja, take place between 29 September and 3 October. The county of La Safor offers visitors interesting excursions. Bordering Alicante is Oliva, with clean beaches and picturesque popular districts. Inland in the province, you can discover unexpected landscapes and monuments, like Parpalló cave, an important prehistoric site, and the Monastery of Nuestra Señora de la Valldigna, from the end of the 13th century. 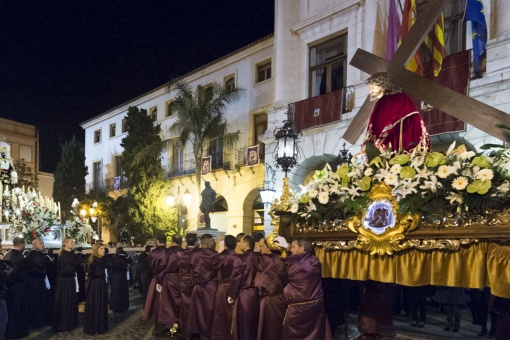