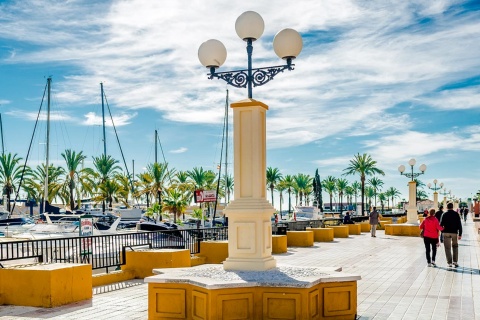 Located on the Costa del Sol, Fuengirola is a city with a rich Andalusian flavour which offers an extensive stretch of coastline covered with magnificent beaches.

Possessing a long tourist tradition, this town in the province of Málaga has a wide range of services and infrastructure, which includes golf courses, riding centres, leisure parks, hotel complexes and restaurants, not forgetting a significant calendar of cultural events. Along with it, Fuengirola has managed to preserve a great many remains left behind by the peoples who inhabited the city in ancient times, such as the Roman baths and villa or the Arab castle of Sohail. Any one of its many restaurants and pavement cafés provides the opportunity to sample the local cuisine, whose star product is fish.

Fuengirola sits on a narrow strip of coastline covering 8 kilometres which has a succession of some of the best beaches on the Costa del Sol. Los Boliches, Fuengirola, La Campana, Torreblanca, Las Gaviotas...well-cared for stretches of sand backed by a long and busy promenade where you'll find residential complexes, hotels, restaurants and other services so you can enjoy the sun and sea in comfort. Sports fans have a wide range of possibilities in Fuengirola. Those who prefer golf will find the town and the surrounding area has some twenty magnificent 18-hole courses which allow the golfer to play year-round. The racetrack and other riding schools from neighbouring Mijas provide excellent facilities for taking up or perfecting the equestrian arts. It is also possible to play tennis in any of the area's clubs. Water sports are especially important in Fuengirola. The coastline has beautiful sea depths which make scuba diving, a sport which can be learned in any of the town's diving schools, particularly attractive. The marina, located next to the fishing port, provides modern facilities for navigation, as well as other water sports, such as sailingor scuba diving. Lastly, outdoor pursuits in the province have the perfect setting inland, where there are a great many routes suitable for hiking, as well as routes on horseback or by bicycle. But Fuengirola provides many other leisure possibilities for all ages. You can visit the Zoo, enjoy an unforgettable day at the water park or tour Sohail Fluvial Park, an extensive and modern recreational area crossed by a navigable canal measuring 800 metres in length. Or if you prefer, you can attend one of the cultural events which are staged in the Municipal Arts Centre or the modern Peace Centre.

Fuengirola preserves witin its streets corners full of local colour and charm. Dominating the centre of town is Constitution Square (19th century), where the Church of Nuestra Señora del Rosario stands. On top of a nearby hill, located next to the mouth of the river Fuengirola, stands the Castle of Sohail, ordered to be built by Abd-al-Rahman III in the 10th century and which still preserves some paintings of its walls. Next to this parade ground, the remains of the old Phoenician settlement have been found, which was the origin of the town (6th-3rd centuries BC). Testimony of the city's importance in the past is the Roman city of Suel, located on the hillside of the castle. Other Roman remains appear in the archaelogical sites of Finca del Secretario and Torreblanca, where there is a Roman baths and a Visigoth necropolis. Fuengirola also has neighbourhoods full of local colour, such as Santa Fe de los Boliches, deeply-rooted to the sea, or Pueblo López, which has streets crammed with beautiful examples of Andalusian popular architecture.

As occurs in other towns on the Costa del Sol, the gastronomy of Fuengirola is characterized by the central role given to fish, cooked on the grill or salted, not forgetting the emblematic fried fish and sardines on the spit (grilled). Also traditional are "ajoblanco con uvas" (a cold soup with almonds, oil, garlic and grapes) and "gazpacho" (made from tomatoes, pepper, bread, oil and garlic). The entire province is well-known for its excellent wines labelled under the Designation of Origin Málaga standard, among which the sweet wines are most prominent. Among the most anticipated events of the year in Fuengirola is its festival in honour of Nuestra Señora del Rosario, patron of the town, which has as its main stage at the festival ground and which is held from 6 to 12 October. In July, the festival of the Virgen del Carmen takes place in the district of Los Boliches, and the Festival of the Castle is held, declared to be of tourist interest. From Fuengirola it is possible to visit other towns on the Costa del Sol. A few kilometres inland are mountain towns such as Mijas, with its typically Andalusian houses, and Alhaurín el Grande, where the church of la Encarnación and the palace of Montellano are outstanding. In the coastal area are Marbella, Torremolinos and Benalmádena, towns with a deep-rooted tourist tradition which provide outstanding infrastructure. Those who prefer to enjoy nature will find the Sierra de las Nieves Nature Reserve to be one of the best-protected spaces in the whole province. 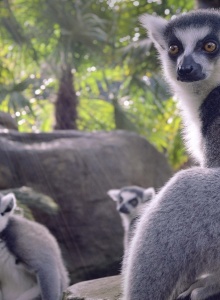