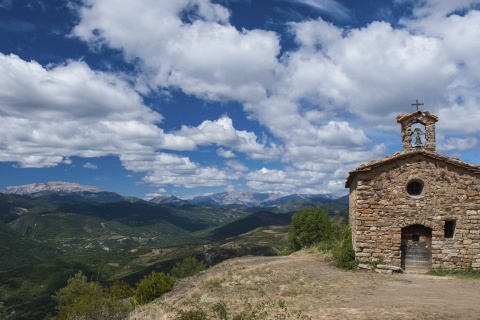 Pont de Suert is the capital of the High Ribagorza region, and is situated at a height of 841 metres on the banks of the river Noguera Ribagorçana, where the valleys of Barravés, Boí and Castanesa meet.

Pont de Suert has an important historical past. It was founded during the High Middle Ages, and the walls and structures of its historic centre are the reflection of an appearance and character which have been shaped by the Pyrenees. In Plaza del Mercadal you will see that there are porches only on one side and decorative features from the old monastery of Santa María de Lavaix. Another must is the main square, which is overlooked by the City Hall, from the 18th century.

This is where the beautiful Calle Mayor begins, which is arcaded in its entirety. Outstanding among the large houses dotted along the street are the façades of Ca de Jaumot and el Segretari. The reason why several streets and squares have porches was to prevent commercial activity being affected on days of bad weather. On the banks of the river stands the Abbey Palace, the former residence of the abbots of the monastery of Lavaix. It is a magnificent 15th-century building in the civil Gothic style which has been considerably remodelled and whose tall tower acts as the belltower for the old church. The church was built in the Romanesque style and was completely remodelled during the baroque period. It has a Latin cross plan with three naves and a transept and currently houses the Ongoing Collection of Religious Art of La Ribagorça.