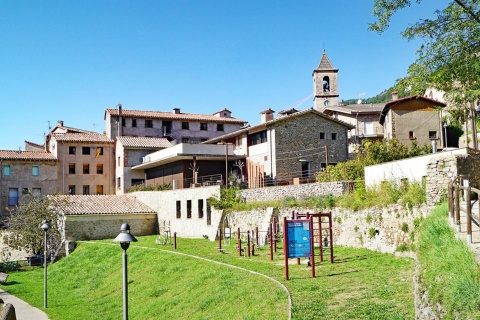 Castellar de N’Hug is a picturesque village in the northern end of Barcelona province, in the Berguedà region.

In a fabulous natural setting, the village includes some lovely Catalan Romanesque architecture. Castellar de N’Hug has well-preserved medieval cobbled streets with beautiful examples of rural vernacular architecture, characterised by traditional stone houses. The Middle Ages was a time of great artistic splendour and prosperity for the village, as can be seen in the many Romanesque structures throughout the region. The church of Santa María de N’Hug, in the village centre, was built in the 11th century, with later Neo-Classical additions.

Nearby are more fine Catalan Romanesque churches, including the early 12th-century Sant Vicenç de Rus, with interesting wall paintings, and San Joan de Cornudell, topped by a bell-gable. Castellar de N’Hug's agricultural origins are reflected in an event which now attracts many visitors, the International Sheepdog Trials. Held on the last Sunday in August, the trials test the dogs' skills with several different tasks. Castellar de N’Hug also has interesting museums to offer the visitor. In the spot known as Clot del Moro there is a Cement Museum, the Museum of the Ashland factory of Castellar de N’Hug, a striking example of industrial Art Nouveau which was the first cement factory in Catalonia.