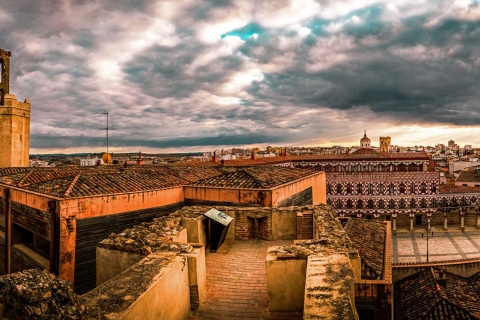 Located on the banks of the Guadiana River, only six kilometres away from Portugal, Badajoz (the largest province in Spain) has always been marked by its proximity to the border.

A stroll around the historic quarter will reveal Arab walls, interesting monuments, as well as picturesque streets and porches. Badajoz is also an excellent starting point for further travelling through the Land of Barros, Mérida and the Cornalvo Nature Reserve. In all these places you can try the delicious Extremaduran cuisine.

The primitive citadel of Civitas Pacis was already widely known during Roman times, yet the Moors were the ones who gave it its present name, when they called it Batalyoz in the 8th century. The city gained enormous political and military relevance when it became one of the Taifa kingdoms that proliferated in the Peninsula following the fall of the Caliphate of Cordoba —the Muslim power that ruled the occupied territories— in the 11th century. Reconquered in the 13th century by the Christian Monarchs, the city reinforced its fighting spirit due to its location on the so-called "line", the boundary between Spain and Portugal.

The historic need for a good defence system is evidenced by its strategic location, on the banks of the Guadiana Riverand over the Muela Hill, a walled precinct made of walls, gates and bastions. The Alcazaba (citadel), declared Historic-Artistic Site, dominates the whole defence network. Its Almohad walls surround beautiful gardensand the Palace of the Dukes of Roca, which presently houses the Regional Archaeological Museum. Here there are more than 15,000 pieces found in the numerous archaeological sites in the province. The most picturesque streets and porches are located at the foot of the Alcazaba, around the square Plaza de San José and Plaza Alta. This last one is made of fifteenth century porches. Another square, Plaza de España, houses the City Hall and the cathedral of Badajoz. The Romanesque-Gothic temple, which resembles a fortress, preserves interesting Renaissance ornamental pieces. It is worthwhile stopping and admiring the bas-reliefs in the stalls of the choir and in the Flemish tapestries that decorate the sacristy. Inside the cathedral there are also paintings by Zurbarán, Ribera and Bocanegra. In the area surrounding Plaza de España, one of the best places for Extremaduran cuisine is found. The cuisine of Badajoz includes ancient recipes made with local products, as well as others that have been brought from America, like paprika and potatoes. Tomato soup, roast lamb and fried trout are some of the dishes that should be served with the excellent Iberian sausages, with the label Designation of Origin - Dehesa de Extremadura. The wines should have the label Designation of Origin - Ribera del Guadiana. You can continue your journey by going to another two museums of great importance in the city: The Regional Museum of Fine Arts and the Extremaduran Museum of Spanish-American Contemporary Art (MEIAC). The collection of the former, which is located in a palatial house from the late 19th century, focuses on the artwork (both painting and sculpture) of Extremaduran artists. Meanwhile, the MEIAC, which is located in one of the bastions of the wall, specialises in Spanish, Extremaduran, Portuguese and Latin American art from 1980 to the present, as a symbol of the three geopolitical currents brought together in Extremadura. One of the most emblematic gates of the city is the Palmas Gate, which leads to the bridge under the same name that crosses the Guadiana River. Two crenellated towers guard the access to this bridge, with about thirty semicircular arches. They were built following the design of Juan de Herrera, one of the most significant architects of the Spanish Renaissance.

A province to discover

A full visit to Badajoz will also lead you through its little squares and gardens, like the beautiful gardens of Castelar and San Francisco. The squares of Soledad, Libertad and San Juan are excellent for feeling the pulse of the city. It is therefore also worth visiting the city during Carnival or during the Easter celebrations. Raya, Vega del Guadiana and Land of Barros are towns that will take us to prehistoric Dolmens, castles and white little villages among holm-oak and cork-oak forests. Among the cities that you will find on your way, the capital of Extremadura, Mérida, the ancient Roman Emérita Augusta stands out. The splendour that it enjoyed as the capital of Lusitania left behind a legacy of innumerable monuments. Not in vain was it declared World Heritage. The National Museum of Roman Art, built by Rafael Moneo, completes the journey around the Roman constructions of the city. The Parador de Turismo (Tourist Inn) of Merida is located in an old 18th century convent. It is an unbeatable choice to stay during your trip, or when attending the Merida Classical Theatre Festival. Vía de la Plata (the Silver Road, which presently goes from Cadiz to Oviedo) is also from the Roman period. This road, which was a pilgrimage route to Santiago de Compostela during the Middle Ages, now leads to interesting Extremaduran towns such as Zafra, Mérida, Caceres (with a historic quarter that was declared World Heritage) and Plasencia. Not far from this road, the national parks of Monfragüe and Cornalvo have nature centres where you can obtain information about the best trails to follow in order to explore them. 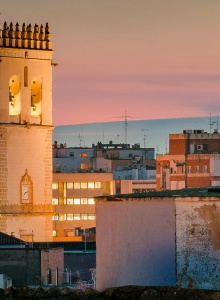 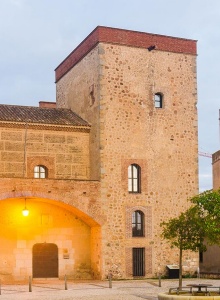 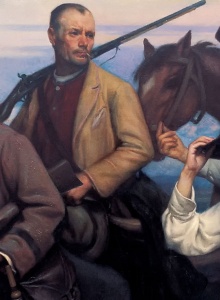 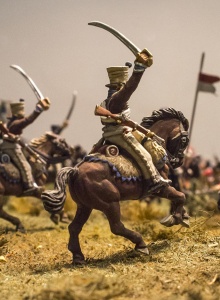 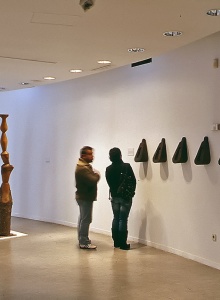 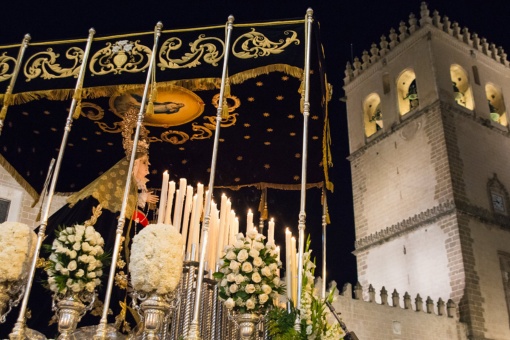