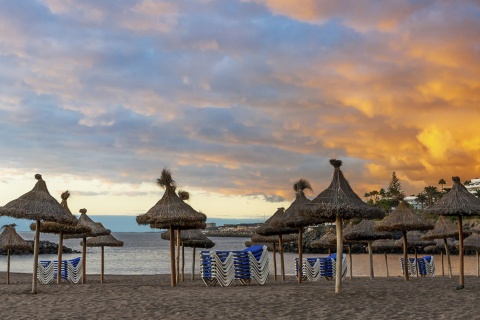 The municipality of Arona boasts more than 15 kilometres of beaches with excellent views of the nearby mountains. Meanwhile, the town itself offers interesting examples of popular architecture combining colonial and Pre-Hispanic elements.

The spring temperatures enjoyed by this region throughout the year are ideal for touring the southern coast of Tenerife and the nearby Teide National Park. The excellent Canary Islands cuisine provides visitors with an insight into the islands' culture.

Situated a few kilometres inland from the Atlantic coastline, in the south of the island of Tenerife, is the town of Arona. Its historic quarter contains a wide repertoire of important examples of popular architecture integrated with the rural environment. Meanwhile, the beaches of Las Américas and Los Cristianos, as well as fishing villages such as Las Galletas, combine the traditions of the Canary Islands with leisure spaces and luxury housing developments. Similarly, the magnificent waters of the area and the sea bottom are perfect for practising nautical sports and submarinism. Situated in the town of Arona is the hermitage of San Antonio Abad, which gave rise in the 17th century to this municipality on its separation from the neighbouring Vilaflor. Its parish church contains interesting carved images, the work of local image makers. These images include the carvings of the Virgen de la Concepción, San José and the Cristo de la Salud. Whitewashed streets extend from this area, whilst the outlines of the volcanic mountains serve as their backdrop.

In addition to the spring temperatures of the Canary Islands coastline, this municipality also boasts protected natural spaces, such as the Montaña de Guaza, and the magnificent natural scenery of the Montaña Amarilla ("Yellow Mountain") and the Valley of San Lorenzo. Impressive views of the Teide, at 3,718 metres the highest peak in Spain, and the various volcanic features (petrified lava flows, pitons, domes, etc) are just a few of the attractions of places like Roque de Jama, the El Centinela mirador and the Malpaís de la Rasca. In the old fishing villages along the coast, traditional charm blends successfully with the luxury housing developments constructed on the cliffs overlooking the Atlantic. These developments include Playa de Las Américas, Costa del Silencio, Palm-Mar and Ten-Bel, the latter offering the added attraction of a salt-water swimming pool. The village of Las Galletas is another excellent spot for hiring vessels and deep-sea immersion equipment or signing up for boat trips and other leisure activities.

Whilst tranquillity is guaranteed on the small beaches and coves, the tourist resorts provide visitors with non-stop amusement. Restaurants, bars and pavement cafes overlooking the ocean are just a few of the options on offer for enjoying the night life of the Canary Islands. The traditional cuisine is another such option. All kinds of international cuisine can be sampled in Arona, but trying some of the area's more typical recipes is an absolute must. Vegetable stews, fish casseroles and charcoal-grilled meat all form part of the local cuisine. "Mojo picón" (a sauce made with oil, vinagar and paprika) and "papas arrugadas" (a potato dish), both extremely tasty, are examples of other products typical of the island. With regard to wines, visitors may choose from a wide range of Label Guarantee bottles produced in the province of Santa Cruz de Tenerife, such as Abona, El Hierro, La Palma, Tacoronte-Acentejo, Valle de Güimar, Valle de la Orotava and Ycoden-Daute-Isora. Arona may be used as a base from which to tour the southern part of the island of Tenerife and explore the Teide National Park, on the ravines of which is situated the magnificent parador. In Vilaflor visitors may admire the so-called Lunar Landscape, whilst a tour along the coastline takes in beaches such as San Juan and la Caleta, as well as the Los Gigantes beach situated at the foot of the cliffs of the same name.