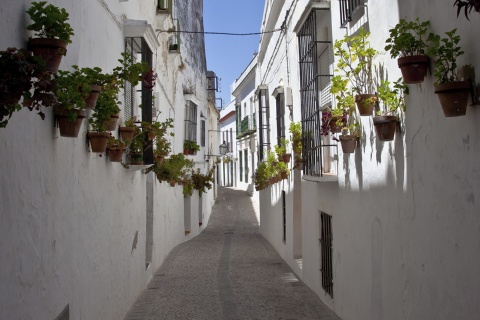 Sitting on a spectacular sheer cliff, Arcos de la Frontera is a picturesque town in the province of Cadiz full of small reminders of its Arab inheritance.

Its old town has been declared Property of Cultural Interest. Towers, churches and splendid viewpoints with views of the River Guadalete are just some of the countless attractions offered by this area, right on the White Villages route. But Arcos is also a place where tradition is faithfully preserved, as can be seen in its festivals, as at Easter, or its cuisine, where the Iberian pig and horticultural products take a leading role.

Inhabited since Prehistory, it was the Arabs in the Middle Ages who made Medina Ar-kosch an important defensive strongpoint. Later, its strategic value meant it came to be the capital of a Taifa kingdom. This Arab past has left an urban pattern of steep, narrow, streets in Arcos de la Frontera on a rocky promontory with the River Guadalete winding at its feet. The historic centre, which houses a great wealth of monuments, stretches between the Cuesta de Belén and Puerta Matrona, the only surviving access point from the old Arab wall. Right in the centre is the Plaza del Cabildo. Some of the most notable buildings in the city are concentrated in this space, such as the Town Hall and the Ducal Castle, a Muslim fortress rebuilt in the 15th century. Opposite those stands the Parador de Turismo, located in the old Casa del Corregidor. Whitewashed walls, grilles and tiles are some of the characteristic features of the building, whose typical Andalusian architecture is perfectly integrated into the houses of Arcos. Before leaving the square, visitors can go to one of the many viewpoints in the area, offering an impressive panorama of the surrounding area. Among religious architecture, the Basilica of Santa María de la Asunción (13th-14th centuries), a church with a Gothic-Plateresque front and a Neoclassical tower, deserves special attention. Both the building and the beautiful organ it houses inside have been declared Historic-Artistic monuments. Other outstanding churches are that of San Pedro, with a Baroque style front and tower, and that of San Miguel, a building currently used as a conference and exhibition hall. Between the 15th and 18th centuries, many religious orders established themselves in Arcos de la Frontera, which is reflected in various buildings, like the Convent of la Encarnación (16th C.), that of La Caridad (18th C.) or the hospital of San Juan de Dios (16th C). And all along the way the historic centre will show the visitor the beauty of traditional regional architecture, with simple houses with whitewashed walls opening their doors to show their interior courtyards decorated with flowers. On the route, some aristocratic houses appear, like the palace of the Count of Águila (15th C), a real jewel blending late Gothic and Mudejar traditions.

The horticulture of Arcos provides excellent vegetables and pulses, which are the basis for some of the most typical dishes: "potaje" (stew with chard) and alboronía (dish made with pumpkin, chickpeas and tomato), as well as meat and fish stews. Cold meats include Iberian ham, always from the mountains of the interior. To round it off there is nothing better than one of the best-known Spanish wines at international level, those produced in Cádiz under the Denomination of Origin Jerez-Sherry and Manzanilla de Sanlúcar de Barrameda. One of the most important festivals in Arcos de la Frontera is Easter, declared of Tourist Interest, culminating on Palm Sunday with the Aleluya bull penning. Arcos de la Frontera is a good base for doing the so-called White Villages Route, including places with impeccable white houses like Ubrique, Medina Sidonia or Vejer de la Frontera. The route passes through Serranía de Ronda, as well as through the natural parks of Sierra de Grazalema and Los Alcornocales. The exceptional geographical position of Arcos de la Frontera enables you to go to beautiful places like the Costa de la Luz, El Puerto de Santa María, Puerto Real (whose old quarter is a historic-artistic site) or Chiclana de la Frontera. At the western end of the Cadiz coast lies Sanlúcar de Barrameda, well known for its manzanilla, with Denomination of Origin, and for being one of the entrances to the Doñana National Park, declared a World Heritage Site. Other recommended cultural routes are the Wine Route, which leads to Jerez de la Frontera, and the Bética Roman Route, passing through towns of that Roman province under the empire, from Santiponce (Seville) to Tarifa (Cádiz(, a good place for a walk in its old town and for going windsurfing.