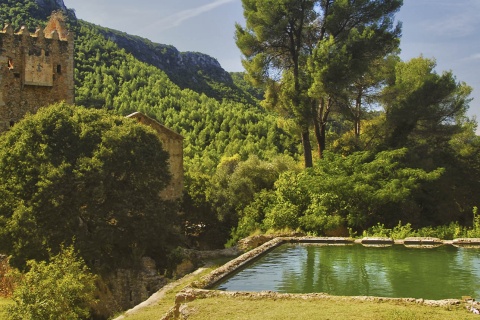 The typically mild and temperate Mediterranean climate means the inhabitants of Alzira are able to celebrate numerous festivals.

Several Paleolithic, Neolithic, Bronze Age and Roman archaeological sites bear witness to the age of Alzira. We can currently see, next to the Júcar, a stretches of wall measuring around 255 metres and large towers belonging to what was the Muslim area, restored in 1973.

In spite of frequent flooding, traditional rural façades can still be seen in the town, as well as examples of modernist historicism linked the land-owning middle classes, such as the building of the Círculo Alzireño. Facing it, the Esculapian School, which today houses the Arts Centre, has a beautiful façade, an arcaded courtyard and a stairway. The City Hall, which has Gothic, Renaissance and baroque features, guards the 'Aureum Opus', an illuminated codex from the 15th century. As regards ecclesiastical heritage, it is worth mentioning the church of Santa Catalina, which combines Gothic, Renaissance and baroque features. And the churches of La Encarnación and San Juan or Santos Patronos, on the outskirts of the town. The people of Alzira clearly like to celebrate. At the beginning of the year is the festival of Sant Antoni del 'Porquet'. In March, during the 'fallas' celebrations, only the capital of the province erects more papier-mâché sculptures in the streets. Holy Week here has been declared a Festival of National Tourist Interest. There are days spent in the countryside when the traditional Easter cake is eaten. On the third Sunday of May, offerings of flowers and fruit are made to the city's patron, the Virgen del Lluch. And in June, the popular pilgrimage to the ruins of the monastery of La Murta is held. The Municipal Museum contains a wide-ranging and valuable display of the cultural heritage of the city and the region.