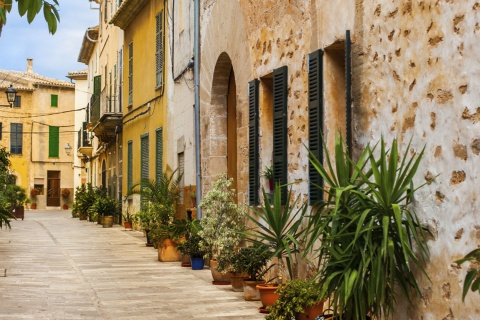 One of its attractions is La Albufera, a natural park created in 1988.

The municipality of Alcúdia is one of the most beautiful places in the Balearic Islands. Virgin coves with crystal waters, surrounded by pinewoods; diverse fauna and environmentally-rich natural settings; archaeological sites and a delicious local cuisine are enough reasons to visit this town, on the northeast of Majorca.

From the old, walled medieval city, the gates of Xara and Palma still remain. From the Renaissance wall, the only thing intact is the bastion of Sant Ferran, at present taken by the bullring. Most of Alcúdia's historic quarter is formed by ancestral homes, with Renaissance windows, and coats of arms. Other structures of interest include: the churches of Santa Ana and Sant Jaume; the Baroque chapel of Sant Crist, which has inside a 15th-century image of Christ; the sanctuary of Mare de Déu de la Victoria, located seven kilometres away from the city; and the City Hall. For people interested in ornithology, this region offers La Albufera, a natural park created in 1988. Located on the bay, more than two hundred bird species can be seen there all year round. Another attraction is the Roman city of Pollèntia, whose remains can be seen in the vicinity of the walled enclosure of Alcúdia. The archaeological site exhibits a group of houses, a theatre, and a forum.