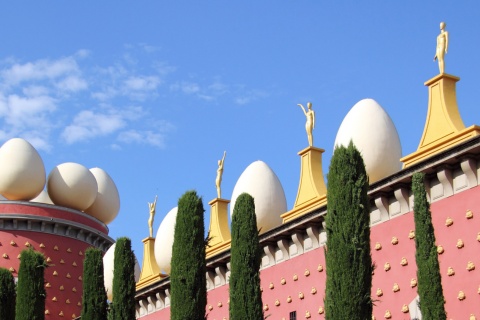 Figueres, county capital of Alt Empordà, extends over a river plain situated inland in the province of Girona.

Known as the home of Salvador Dalí, this town with deep Catalan roots offers visitors the chance to go to the Dalí Theatre-Museum, dedicated to the genius of surrealist painting. It is a cultural range completed with various museums and a calendar full of festivals and events divided up throughout the year.

Figueres also has an important heritage of monuments, among which the old medieval walls and the castle of Sant Ferran are outstanding, as well as examples of Modernist and Neoclassical architecture which appear dotted around the city centre. To the many attractions of Figueres, are added its excellent position, which enables you to discover the great tourist potential offered by beautiful parts of the Costa Brava. Situated between the eastern end of the Pyrenean chain and the Costa Brava, Figueres is a town full of tourist attractions. On the outskirts, the castle of Sant Ferran, a fortress built in the 18th century, dominates the town on top of a hill. Its colossal size and its perimeter of more than three kilometres, make it one of the largest in Europe. The historic centre of Figueres is bounded by remains of its old wall, put up in the Middle Ages to defend the town. Beautiful corners from the medieval period are preserved, like the Plaza del Ayuntamiento, remodelled in Neoclassical style and where the council building stands, or the area around Carrer Magre, where there old Jewish quarter was located. La Rambla is the main place for walking and the real heart of the city. This lively commercial street concentrates the most ambitious architectural projects of the 19th and 20th centuries, most of them pushed forward by the rising local middle classes of the time. The great profusion of modernist buildings, like Casa Cusí, Casa Puig-Soler and Casa Salleras should be pointed out; and, in Neoclassical style, Casa Bonaterra, Casa del Cafè Progrés and Casa Polideseia should be mentioned. In terms of religious architecture, the church of Sant Pere deserves special attention. Originally build in Romanesque style, the parish church was rebuilt in the 14th century under Gothic rules. Later other elements were added, such as the transept and the apse, both from te 18th century. Other interesting buildings are the chapel of Sant Sebastià, of medieval origin and remodelled at the beginning of the 17th C. and the Convent of Els Caputxins, a complex built in the 18th century.

Without doubt, however, one of the historical milestones that has left the greatest mark on the character of the town was the birth of Salvador Dalí. The Dalí Theatre-Museum, situated in the old municipal theatre, has become one of the main cultural places to see in the city. Designed by the artist himself, it holds an important exhibition, which, through numerous works, allows you to take a trip through the career of the main considered a master of Surrealism. The site was extended with the Torre Galatea, where the artistic genius died. Another two museums complete Figueres' wide cultural offer: the Catalan Toy Museum, which exhibits an interesting collection of toys from different periods and the Empordà Museum, where you can penetrate the history and art of the county. All this will contribute to uncovering a town with a deep Catalan nature, as demonstrated by its being the home of the sardana, the typical Catalan dance.

The excellent location of Figueres enables you to make interesting trips throughout the county. On the coast are picturesque places like Colera, a seaside village which has beautiful beaches like Garvet and Els Morts; Llançà, with a lively marina; Cadaqués, home of the Salvador Dalí House-Museum, and Port de la Selva, where the Romanesque monastery of Sant Pere de Rodes is located. To the south of Cap de Creus is Roses, which preserves remains of the ancient Greek colony of Rhode, and Castelló d’Empuries, where the church of Santa María (10th C.) is outstanding. This part of the Costa Brava has large protected areas. In the Gulf of Roses is the Aiguamolls de l'Empordà Natural Park, an important ecological reserve and refuge for water birds. For its part, the Cap de Creus Natural Park is an excellent place from a natural point of view and a clear example of the appearance of the Costa Brava. The cuisine of Figueras combines raw materials from the sea and the mountains. From the nearby coast come fish, which are served boiled, baked, grilled or in sauce. Other recipes, like chicken or rabbit with spiny lobster and beef with vegetables, wild mushrooms or fruits, are also typical. To accompany these, you can choose any of the excellent wines and cavas labelled under the Ampurdán-Costa Brava Denomination of Origin. The popular "novell" (rosé) wine, as well as sweet wines and young reds should be mentioned. 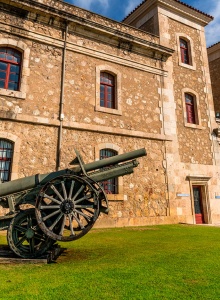 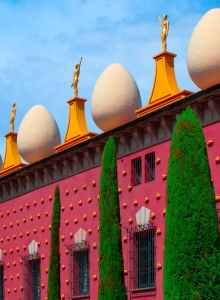 Impressive cliffs, beaches and coves of golden sand, and typical Mediterranean landscapes are the essential features of the Costa Brava, Girona’s wild coast.…

Impressive cliffs, beaches and coves of golden sand, and typical Mediterranean landscapes are the essential features of the Costa Brava, Girona’s wild coast.…

Impressive cliffs, beaches and coves of golden sand, and typical…

Impressive cliffs, beaches and coves of golden sand, and typical…