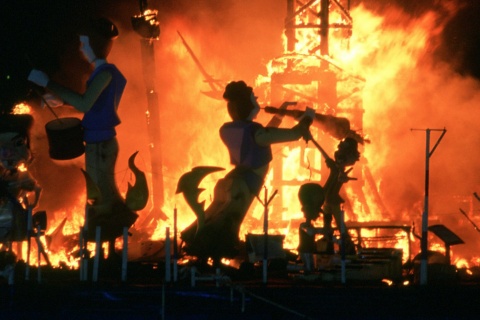 Alicante celebrates the coming of summer with the bonfires of San Juan. In a spectacular display of music, colour and fireworks, thousands of people throng the streets to experience this fiesta which pays tribute to fire.

To celebrate the arrival of summer, the people of Alicante would traditionally flock to the countryside on 23 June for a festive dinner: they feasted on typical products, and at midnight they would light bonfires and dance around them, set off fireworks and go swimming in the sea. This custom endured over the years, and in 1928 the fiestas of the Bonfires of San Juan were formally constituted.

For several days, Alicante celebrates this great homage to fire, where the stars of the show are genuine works of ephemeral art: the bonfires and the enormous cardboard and wooden figures which go up in flames on the night of San Juan. The queen of the fiesta, known as the "Bellea del Foc" ("Beauty of Fire"), is chosen in May from among the candidates presented by a committee in each neighbourhood. The festivities officially begin on 20 June with the "plantà", or building of enormous bonfires with their tongue-in-cheek cardboard figures which fill the streets of Alicante with wit and good humour. That day the "barracas" or large tents are also put up to serve as a public dance floor, and where fiesta-goers can sample the typical figs and "cocas" (a kind of pastry with tuna, onions and pine nuts). Some of the highlights of the festivities include the Entry of the Bands and Committees, with their respective "beauties" and their ladies-in-waiting wearing traditional dress; the floral offering to the patron saint of the city, the Virgin of El Remedio on 21 and 22 June; and the international folklore parade, a spectacular procession featuring dance troupes from all over the world. In addition, every day at two in the afternoon from 19 to 24 June, there are firework displays in Plaza de los Luceros square: these are the ear-splitting "mascletàs", for which ear-plugs are highly recommended due to the racket of the exploding firecrackers and rockets. And finally at midnight on 24 June comes the "cremà" (burning), the high point of the fiestas. After a spectacular white palm tree of fireworks, the bonfires all over the city are set alight and blaze away amid much merriment and dancing and singing, while fire-fighters shower the merrymakers with water in what is known as the "banyá". But the fiesta is not over yet. From 25 to 29 June there is a fireworks competition on the El Postiguet beach, and the historic centre of the town comes alive with a medieval market and a range of shows.