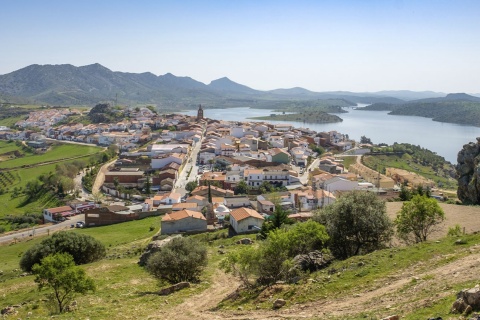 The town of Alange in located on the banks of the reservoir of the same name. In Alange we can find cave paintings, as well as some splendid Roman thermal baths, and many monumental buildings.

The town is located among the three rivers that form the reservoir (Matachel, Palomillas, and Valdemedel). This excellent location gave rise to its rich natural and monumental heritage. In the reservoir we can enjoy water sports, such as canoeing, windsurfing, or sailing. The whole municipality is filled with archaeological sites, many of which lie underwater, on the bottom of the reservoir. The kind, medicinal waters of Alange originated the magnificent Roman baths, already there in the times of Trajan and Hadrian. The spa, still standing, has sections that date back to the Roman Empire, sections from 1820, and some other from 1860, in addition to later restorations. Adjacent to the spa we have the hermitage of San Bartolomé. In the village we must visit the Casa de la Encomienda (House of the Commander), which has lost its original structure, but still preserves a great courtyard, with the remains of columns and capitals, as well as a Coat of Arms. We also should go to the church of Nuestra Señora de los Milagros, a Gothic-Mudejar monument declared to be of Historic-Artistic interest. On the hill of Culebra we find the remains of a fortress that was built by the Arabs in the 9th century, which still preserves its keep.