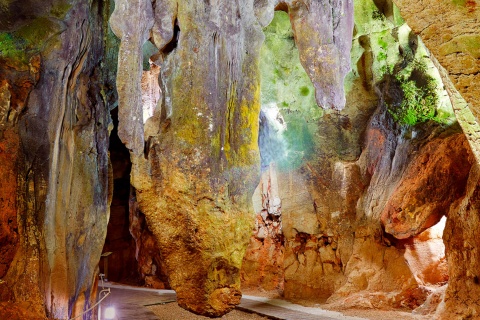 A journey into the past on the shores of the Mediterranean

Used by man since prehistoric times, it is associated with ancient Moorish and Christian legends.

It is a cavity formed in limestone from the early Cretaceous period, deposited approximately 135 million years ago. Known since antiquity, in 1768 the naturalist Cavanilles described archaeological discoveries made when drilling for water. In 1913, the pre-historian, H. Breuil, called attention to their high scientific interest. The cave has great geological and archaeological value, with Palaeolithic and Neolithic remains having been found, as well as paleontological vestiges of hyenas, horses, bears, bulls, hippopotami and rhinoceroses, now housed in Alcoy Museum. The entrance is 70 metres above sea level and the cave extends for 440 metres, the visitors’ path being over 300 m in length. In it, you can see stalactites, stalagmites and large domes, more than 50 metres high. The final leg of the route leads to a beautiful lake called Toll Blau.