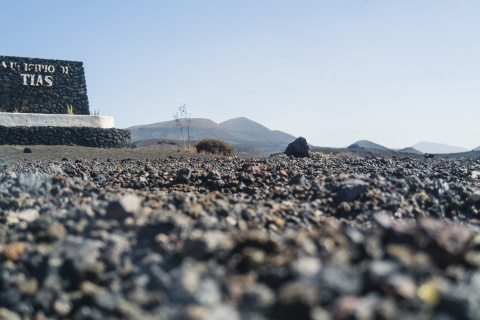 Surroundings of Tías on the island of Lanzarote (Canary Islands).

Tías, a town located in south central Lanzarote, is one of the principal tourist centres on the island. As well as the lure of the picturesque villages of the interior, immersed in a matchless volcanic landscape, there are excellent tourist facilities available along the coast.

More than six kilometres of coastline where long stretches of sand follow one another, such as Playa Grande, Matagorda and Los Pocillos. Puerto del Carmen is the biggest coastal enclave of Tías. There is an outstanding variety of leisure and tourism on offer, which includes a great many restaurants and shops, as well as a marina where you can do all kinds of water sports or take boat trips. And in any of the sunny outdoor restaurants facing the sea you can try some of the specialities which make up the tasty Lanzarote cuisine.

A pioneering town in the tourist development of Lanzarote, Tías took advantage of its enormous tourist potential several decades ago, both the coastline, full of sun-drenched beaches of fine sand, and the villages of the interior, full of local colour and originality. Conil, Tegoyo, Masdache or Tías itself are just some of them. These small towns, painted radiant white, provide a sharp contrast amid the dark and singular landscape of lava and volcanic ash which surrounds it. In the streets, quiet and deserted, the visitor can take in the beautiful corners and appreciate a great many buildings which preserve traditional architectural features. Puerto del Carmen In the coastal area, Puerto del Carmen has established itself as one of the main tourist centres on the entire island. Its network of whitewashed houses spreads over a hillock facing the natural port of La Tiñosa, an old seafaring village which gave rise to the spot. It is here where one of the most emblematic buildings stands, the church of La Candelaria, built at the end of the 18th century after Tías received the title of parish. Luxury hotels, residential complexes, shops, restaurants and even a casino are some of the modern facilities for leisure and tourism this centre has available. And when night falls, its countless outdoor cafés, pubs and nightclubs provide the best nightlife on the island. The options are increased by the enormous possibilities offered by its marina, where you can do all kinds of water sports and which is the usual point of departure for boat trips to the neighbouring island of Fuerteventura or the small island of Lobos. In Puerto del Carmen and its surrounding area there are six kilometres of top-quality beaches, such as Playa Blanca, Los Pocillos or Matagorda. Graced with a magnificent climate practically year-round, they are perfect places to enjoy the sea and sports such as windsurfing. Surrounding area and gastronomy Tías, situated in the south central area of the island, provides easy access to other points of interest. Several kilometres to the south is Yaiza, a historic town in which you can admire the vestiges of the first settlements on the island. It is surrounded by a volcanic environment which forms places of matchless beauty, such as El Golfo or los Hervideros. But the greatest centre of tourist attention is, without a doubt, the Timanfaya National Park, a true showcase of the island's volcanic ecosystem. The visit includes a bus trip which covers the Route of the Volcanoes and which leaves from the visitors' centre. The park is in turn surrounded by the Volcanes Nature Reserve, where fields of volcanic ash and lava run down to the coast. Heading north, we will reach towns such as San Bartolomé, where the Casa del Mayor Guerra and Casa Ajei are outstanding, and Tinajo, in whose sanctuary of Mancha Blanca the island's patron, the Virgen de los Dolores, is venerated. Nor is it far from the capital, Arrecife. In this port and trading city it is worth visiting its two fortresses, the Castles of San Gabriel and San José. As on the rest of the island, the gastronomy of Tías offers us tasty dishes such as ranchos (a traditional pork stew) and the famous papas arrugadas (boiled potatoes with salt), which are served accompanied by mojos (sauces). The sea supplies the dining tables of Lanzarote with excellent fresh seafood and fish, such as ”vieja”, stewed or opened and roasted on the grill. Also enjoying much acclaim are the cheeses of the area, both fresh and cured. The wines with the Designation of Origin Lanzarote guarantee are mainly produced in the region of La Geria, belonging to Yaiza. Outstanding are the aromatic sweet wines, whites and vintage wines.