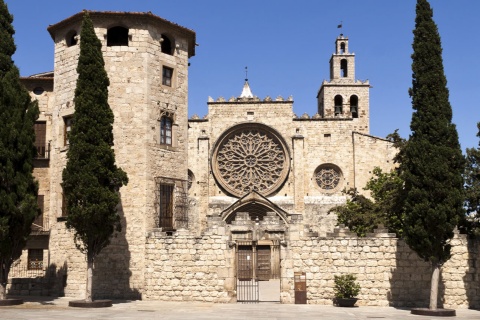 Sant Cugat del Vallès is a town located only a few kilometres away from Barcelona, in the region of Vallès Occidental. Its monumental heritage, lead by an ancient Benedictine monastery, is surrounded by natural areas of great beauty.

Sant Cugat stretches out through a great plain delimited by the sierras of Collserola and Galliners. Despite the many archaeological artefacts found in this area from 2000 BC to 1500 BC, the origins of the city can be narrowed down to the Roman fortress of Castrum Octavianum (4th century AD).

On this parade ground, the ancient Benedictine monastery of Sant Cugat was erected, the most remarkable building in the city. The abbacy has a church (12th-14th centuries), and a magnificent Romanesque cloister from the late 12th century. Also note other remarkable outbuildings, like the chapter house, the palace, and the Renaissance upper cloister. Under the wing of the monastery, an important agricultural town developed, with numerous surviving farms, such as Can Rabella (14th century), Can Bellet (16th century), and Torre Blanca (17th century). Sant Cugat also has a number of hermitages scattered around the township, such as Sant Adjutori, Sant Crist de Llaceres, Santa Maria de Campanyà, etc. Other interesting choices include visiting the medieval castle Castell de Canals, and the Gothic bridge Can Vernet. The city centre also has beautiful examples of Modernist architecture, such as Casa Armet, by Ferrán Romeu, and Casa Lluch, by Eduard Maria Balcells. Sant Cugat del Vallès is a privileged spot, from an environmental point of view. Central Park (Parque Central), located at the heart of the urban centre, is the main green area in the city. Nearby we find Collserola Park, considered to be one of the biggest metropolitan parks in the world. In this town, a number of interesting routes originate, such as the one that goes from Can Borell to the Romanesque hermitage of Sant Medir, going through a gorgeous landscape of forests and riverside vegetation. 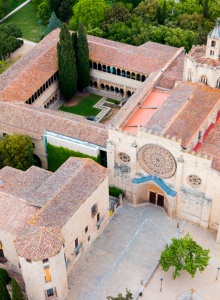