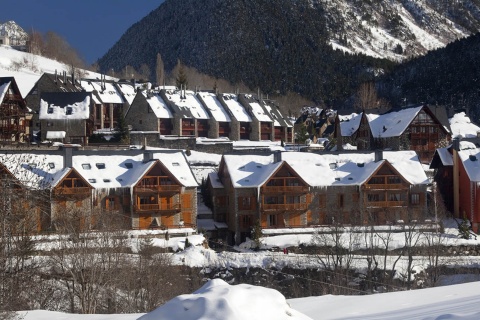 View of Salardú in Lleida (Catalonia)

Salardú is the capital of the Naut Aran region, in the Arán Valley.

It is located at 1,268 metres above sea level, at the convergence of the Garona and Unhóla Rivers. The village was fortified in the Middle Ages on account of its strategic position. The castle once stood in the upper part of the village, where there is now a church. At the centre of the old part is Plaza Mayor Square, where there is a pretty fountain from the 18th century.

Also outstanding is the church of Sant Andreu (12th-13th centuries), with a later bell tower, dating from the 15th century. Inside the church you can see the "Cristo de Salardú", a Romanesque statue from the end of the 12th century, measuring some 62 cm.

There are many activities available in the village, such as horse riding, golf, swimming, outings on the many signed routes, and fishing. The traditional Santa Creu Fiesta is celebrated 3 May. You should try olla aranesa (a hearty casserole), the region's best-known dish.