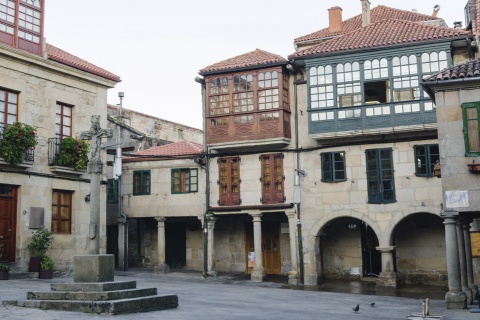 Pontevedra, a city with a long maritime and trading tradition, boasts one of the largest and most elegant historic quarters in the whole of Galicia. Situated on the edge of the estuary of the same name, the old town extends in a network of streets and squares and contains major civic and religious buildings.

Called Ad Duos Pontes by the Romans, Pontevedra has over the centuries adopted a character profoundly marked by the sea, as demonstrated by the shipyards, fishing port and the city's intense commercial actvitity.

The original settlement emerged at the confluence of the river Lérez and the Pontevedra estuary as a walled enclosure of cobbled streets and small secluded squares, some of them arcaded. Situated at the centre of the historic quarter is the Plaza de España and the City Hall, an eclectic building constructed in the 19th century. Its main façade is defined by four pairs of columns and the frontons above the doors, as well as the balcony and the clock. Extending opposite this building is the so-called Alameda, a wide avenue lined by grand civic buildings such as the Diputación (provincial government), the 19th-century façade of which contrasts with the medieval ruins of the convent of Santo Domingo. This 14th-century complex has National Monument status. One of the sites of the Provincial Museum, this enclave houses architectural elements of various origins, such as Romanesque and Gothic capitals, gravestones and sarcophagi. Another place of interest in the old Pontevedra is the so-called Sanctuary of the Pilgrim (18th century), which preserves the image of the city's patron saint. The work of the Portuguese architect Antonio Souto, it has an almost circular ground plan and a Baroque façade with several 18th-century Neoclassical additions. Situated opposite this church is the traditional Plaza de la Ferrería, which is surrounded by important buildings such as the church and convent of San Francisco, constructed in the late pointed style between the 14th and 15th centuries. Based on a Latin-cross ground plan with a sanctuary and three apses, it contains several medieval sarcophagi. The Provincial Museum of Pontevedra, one of the largest in Galicia, merits special consideration. Its collection is distributed amongst the ruins of St Dominic and another four buildings overlooking the Plaza de la Leña. The main exhibits are the large collection of medieval art and Spanish and European paintings from the 16th to the 18th centuries, and a selection of works of popular art by Galician artists. A tour of Pontevedra takes in typical shopping streets named after specific guilds and granite squares such as the Plaza del Teucro, Plaza de Cinco Calles and the Plaza de la Verdura, finally arriving at the basilica of Santa María. Constructed during the 16th century by the guild of sailors, this grand Renaissance church displays great sophistication in its forms. Hence, the interior of the building boasts a nave and two lateral aisles covered by rib-vaults and a series of lateral chapels. The outstanding feature of the exterior is the main façade, the work of Cornelis de Holanda and Juan Nobre. All of this combines to produce one of the jewels of Galician art. Gastronomy and the Outskirts The deeply-rooted maritime tradition of Pontevedra and the nearby ports has resulted in a type of cuisine largely based on fresh fish and seafood. Typical dishes include oysters and mussels, as well as cockle and sardine pies. Another option is to try the excellent fresh-water fish, the best of which are the trout, salmon and, especially, the lamprey. Wines with the Rías Baixas Label Guarantee make an excellent accompaniment to any of these dishes. The province of Pontevedra contains two of Galicia's most important protected spaces. One of the finest is the National Park of the Atlantic Islands, which encompasses the Cíes Isles, as well as the isles of Ons, Cortegada and Sálvora. Fringed by sheer cliffs and sandy beaches, their coasts are the home of thousands of migratory birds. The wealth not only of the wildlife and flora but also of the sea bottom constitutes an ecosystem of inestimable ecological merit. The Nature Reserve of Monte Aloia in the Serra do Galiñeiro mountain range boasts archaeological remains of great merit, whilst its highest point affords spectacular views over the Miño valley. The Pontevedra coastline is formed by the Rías Baixas, which are dotted with picturesque fishing villages and highly attractive towns such as Sanxenxo, Vilagarcía de Arousa, O Grove and the island of A Toxa. Pontevedra and its province offer a wide range of hotel accommodation. Situated inside the historic quarter of the city is the 16th-century "Casa do Barón" a "pazo", or Galician country house, now functioning as a parador. Opposite the Arousa estuary, at the heart of the Rías Baixas, is the Parador de Cambados, housed in the old "Pazo de Batán Barón" (17th century). One of the finest in terms of location is the Parador de Baiona, a walled fortress on the Monterreal peninsula. Finally, the Parador de Tui is a reproduction of a traditional Galician "pazo" in this historical town on the Portuguese border. Commencing in Portugal, the Camino del Norte (northern road) of the ruta jacobea (pilgrim's route to Santiago de Compostela) enters Spain via Tui and crosses the province of Pontevedra from south to north until it reaches Santiago de Compostela. 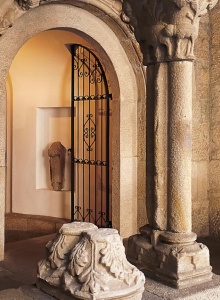 Ruins of the Santo Domingo Monastery 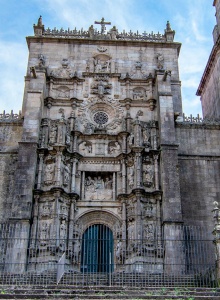 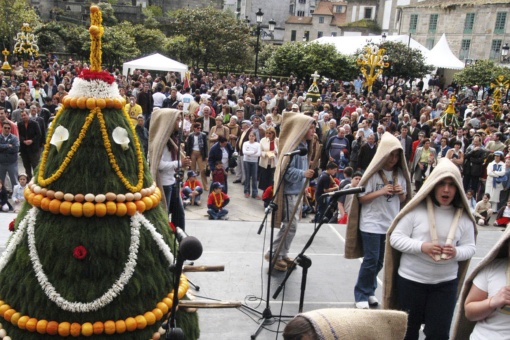