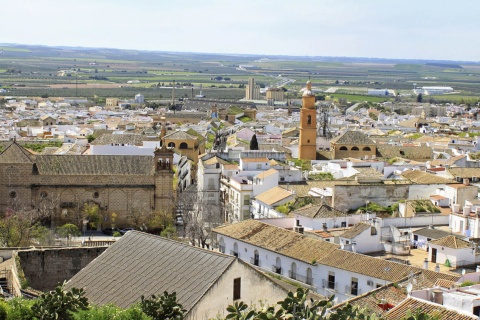 Panoramic view of Osuna in the province of Seville (Andalusia)

The Sevillian countryside to the east of the province, has a ducal town which has been declared a Historic-Artistic Site. The rich monumental wealth of its historic quarter is highlighted in a typically Sevillian whitewashed country house.

This is an excellent opportunity to find out more about the history of this region which can trace its origins back to the Tartessans. The archaeological sites at Las Canteras and Holy Week in Osuna, which has been declared a Fiesta of National Tourist Interest, will help the traveller to get to know the essence of this part of Andalusia.

Osuna, known as the Turdetani Urso, extends along the slope of a small hill which served as a watchtower over the extensive fields of olive trees and cereals in the Sevillian countryside. Its long history has left a legacy of interesting monuments and artistic works from the various cultures that settled here.“The Osuna Reliefs” are Turtedani pieces from archaeological sites in this area which are kept in the National Archaeological Museum in Madrid. Under the Roman Empire, this town also had great importance, as can be seen in the “Osuna Bronzes”, a compilation of laws which can also be seen in the same museum.From the Arab period, Osuna has some architectural evidence such as the Torre del Agua and numerous canvases of its walls. The structure of both belongs to the Almohad period. The history of the city continues with the Reconquest by Fernando III the Saint and its integration into the Order of Calatrava, until it came under the government of the Duke of Osuna. It was at this time, between the XVI and XVII centuries that Osuna began to have its period of maximum wealth and splendour, which is why numerous constructions were built in the Spanish Renaissance and Baroque periods. The Ducal TownA good example is the beautiful Historic-Artistic Site formed by the University, the Ducal Pantheon and the Collegiate Church, which are located on the promontory dominating this Andalusian town. In the sombre fabric of the University the arcaded Renaissance courtyard, the Mudejar coffered ceilings of its central hall and the mural paintings in the Degree Chamber and the Oratory attract the visitor's attention.The Collegiate Church of Santa María de la Asunción (XVI c.), in the plateresque style, has a magnificent collection of canvases by José de Ribera “El Españoleto” (Museum of Religious Art). These panels were produced for the Duke of Osuna when he was Viceroy of Naples. Another master of the Spanish baroque, Juan de Mesa, is responsible for carrying out the carving of the Christ of Mercy, in the Chapel of the Immaculate Conception. Next to the collegiate church is the Ducal Pantheon, where the tombs of the Dukes of Osuna lie. Its courtyard and chapel are one of the most harmonious displays of the Andalusian Renaissance.The Monastery of la Encarnación is another important baroque construction the traveller should not miss. It is worth stopping to look at the XVIII century triana ceramic adorning it. Carvings from the school of Alonso Cano are some of the pieces of religious imagery enriching it.In the Plaza Mayor, the centre of the historic quarter, there are important city monuments such as the Town Hall, Casino, the convent of la Concepción and the Torre del Agua. This Almohad defensive bastion now houses the Archaeological Museum, in which you can see prehistoric remains, Iberian pieces, Roman pottery and Visigoth bricks, among other collections of bronzes and coins. The most famous object is the “Toro de Osuna”, an Iberian piece.In the civil architecture, the former palaces of the Marquis of la Gomera, of los Cepeda or los Govanes and Herdara show the splendour of this Sevillian city. A multitude of churches, convents and whitewashed façades complete the panorama of this sector of the city.Archaeological SitesOn the outskirts of the historic quarter is a beautiful landscape formed by blocks and outcrops called las Canteras. It is here we find the cave dwellers' necropolis and the Roman theatre, among other archaeological remains that date from the VII century B.C. to the Visigoth period.Osuna is an excellent place to enjoy the gastronomy and traditions of the area. Among the latter are the Holy Week celebrations declared a Fiesta of National Tourist Interest in Andalusia. During this week the streets are decorated and the century old carvings by masters of baroque religious images such as Juan de Astorga, José de Mora or Juan de Mesa are taken through the streets.Sevillian culture is also transmitted through its stews. Ardoria, made with garlic, tomatoes, bread, olive oil, ham and boiled eggs is one of the most typical starters in Osuna. As well as the cocido ursaonés in which pork bones, backbone and ribs are added to chickpeas, leeks, carrots and onions. Diners should also try another dish which is typical of the region such as repapalillas, made with eggs, milk, flour, garlic, parsley, chives and salt cod. Potatoes boiled with pork, fried breadcrumbs and pea and bean stew complete the most typical local offer. For dessert, nothing better than homemade cakes prepared by the nuns at the Monastery of la Encarnación.