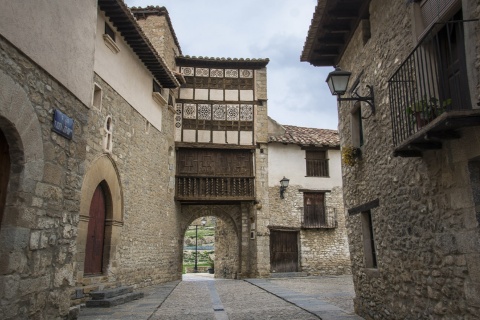 One of the gems of the Maestrazgo, in the province of Teruel, is the mediaeval town of Mirambel, whose architectural site received the “Europa Nostra” Award for restoration some years ago. Its historic quarter has the Property of Cultural Interest designation.

Located on a plateau by the Cantavieja River, the almost perfectly preserved walled town of Mirambel draws you into its mediaeval environment. Of particular note are the Portal de las Monjas gateway, with its plaster latticework decoration. This 13th century wall is the most complex and best-preserved of the Teruelian Maestrazgo.

The Town Hall is a monumental three story building, with its characteristic Aragon-style colonnade market. It also houses the Gothic prison and a beautiful legislative chamber. Next to it stands the solid and elegant Baroque parish church. Highlights include the Gothic Augustinian convent, attached to a church; the San Roque Chapel, which preserves an altarpiece from the 18th century and a baptismal font from the 17th century inside, and which is decorated with sgraffito and El Motivo del Tigre; and San Martín, which also houses several interesting altarpieces. The streets and squares of Mirambel are a truly harmonious whole. From time to time, the visitor comes across stately palaces and homes such as those in the Plaza Aliaga square, built on three floors of dressed stone. The upper floors have the traditional galleries with rounded arches. Outside the urban centre of Mirambel, you can find the Mas Fortificado, a group of buildings in the countryside dating back to the 14th-15th centuries.