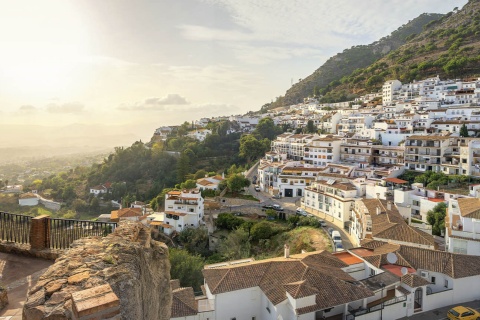 Mijas, a tourist town at the foot of the hills of the same name, possesses typically Andalusian houses. Its traditional status as a mountain village has been combined harmoniously with a major tourist complex located in the coastal enclave of La Cala, where there are 12 kilometres of beaches.

The whitewashed streets of historic quarter, Arab in layout and nestling in the mountain landscape, houses some buildings of interest, among them some churches and hermitages. The surrounding area, meanwhile, preserves some archaeological sites, testimony to the town's rich prehistoric past. Not forgetting other attractions Mijas offers, such as its gastronomy, inherited from Andalusia's rich culinary tradition and its deep-rooted custom of fairs and festivals.

Mijas town, Las Lagunas, La Cala... three sides to a locality which has made the most of the many charms it possesses to provide one of the most attractive tourist destinations on the Costa del Sol.The excellent climate throughout the year, as well as the quality of the sea water, make Mijas an ideal destination for those who are looking for a place which allows them to enjoy the coastline without missing out on the attractions hidden in the mountains of Málaga.Las Lagunas is the most innovative side of Mijas. Golf courses and other sports and cultural facilities are just a few of the many services this district provides.Approaching the coast, the rugged inland terrain evens out as it reaches the enclave known as La Cala. A traditional seafarers' town, today it is the centre of 12 kilometres of beaches. El Farillo, Calaburras, La Butibamba, El Chaparral or La Cala are just some of them, next to which are elegant housing developments, hotel establishments and many other facilities. Here the visitor can play golf, tennis and do all kinds of water sports, such as scuba diving and sailing. Another possibility is to bathe in the water, or simply lie out and soak up the sun..Mijas townThe historic quarter of Mijas is situated inland, on a hillside of the mountains of the same name. Standing on this spot, like a huge balcony overlooking the Mediterranean, the layout of the town is an unmistakable reminder of its Arab past. A tour through its lively streets reveals a typically Andalusian town steeped in history and full of charming corners. The bullring, with its quadrangular exterior, the sanctuary of the Virgen de la Peña (17th century) or the church of la Concepción (16th century) are some of its principal monuments. It is also worthwhile visiting the Auditorium and taking a quiet stroll along the Wall and around the gardens and balconies which provide exceptional views of the Costa del Sol. And, from time to time, the visitor will be surprised to see the charming donkey-taxis, which offer trips around the centre and the outskirts of the village. Hiking lovers can enjoy numerous rural paths which run inland through pine groves and around peaks. The tracks which lead to the hermitage of the Way of the Cross (19th century) or the old marble quarry are just some of the enticing options which await the visitor.Gastronomy, festivals and surrounding area The gastronomy of Mijas gathers together a wide selection of regional traditions. However, the town is well-known for its special devotion to first courses, particularly soups: garlic soup, "cachorreñas" (with potatoes, cod and "cachorreña" orange juice), "maimones" (bread, garlic and oil) or tomato soup, not forgetting the famous "gazpachuelo" (soup of potatoes, bread and mayonnaise). The Designation of Origin Málaga standard, meanwhile, ensures excellent sweet wines. Year after year, Mijas is lavishly decked out to celebrate its fairs and festivals. The festivities in honour of the town's patron, the Virgen de la Peña, take place between 7 and 12 September. The festivals of Las Lagunas and La Cala (25 July) are also eagerly awaited. Mijas provides easy access to all major points on the Costa del Sol. Featuring among them are Málaga capital, which combines significant heritage, headed by the Citadel and the Castle of Gibralfaro, with an extensive choice of leisure options. Torremolinos, Benalmádena and Fuengirola are other towns with a deep-rooted tourist tradition. Inland, we will find villages with a mountain flavour such as Alhaurín el Grande, with its church of Nuestra Señora de la Encarnación and the palace of Montellano. In the Sierra de las Nieves Nature Reserve, in the heart of the mountains of Ronda, we can also see the most singular fir tree in the world, the Spanish fir.