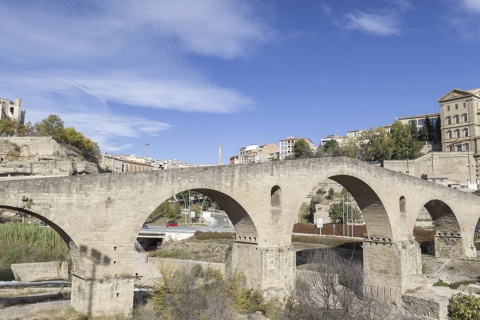 Manresa, in the interior of the province of Barcelona, is the capital of the region of Plà de Bages. Its city centre is located on a plain from which we can make out the rocky outlines of the Mountains of Montserrat Nature Reserve.

The houses of Manresa are arranged around the basilica of Santa María de la Seo. This structure combines both Romanesque and Renaissance elements, although its mainly a Gothic building.

The reredos are also medieval, and constitute important examples of Catalan-Gothic painting. In the historic quarter we find remarkable buildings such as the City Hall, the Palace of Justice, and Pont Vell. This bridge is associated with the worship of San Ignacio de Loyola in Manresa, as well as the architectural compound of Santa Cova. This sanctuary was the home of St. Ignacio de Loyola, founder of the Society of Jesus, when he stayed in the city. As for Modernist architecture, Manresa has some beautiful buildings, such as the ones built by local architect Ignasi Oms i Ponsa. Some examples include the house of Torrents, the tower of Lluvià and the flour factory La Florinda. Catalan industrial architecture in this town includes many other factories.