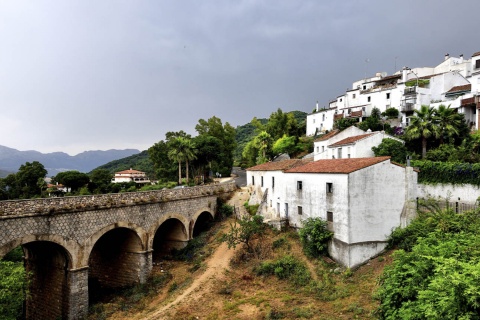 Situated very close to Algeciras Bay, Jimena de la Frontera is an exceptional spot where the Ronda Mountains and the Strait of Gibraltar meet. Its old town has been declared Property of Cultural Interest.

Jimena de Frontera, a town whose origins go way back in time, enjoyed a boom during the Moorish period, especially as a frontier town in the Nasrid Kingdom of Granada during the 14th and 15th centuries. The emblematic building in this town - its Moorish castle - was built in that period. Together with the walls and the cistern, known as the "Moorish Queen's Bath", it forms a priceless architectural site.

Other very attractive elements are the churches of La Misericordia and La Victoria, Los Ángeles Shrine, the Royal Artillery Factory building, the cave paintings in the nearby Laja Alta Cave, and the splendid nature area - the Los Alcornocales Nature Reserve - where the cave can be found.