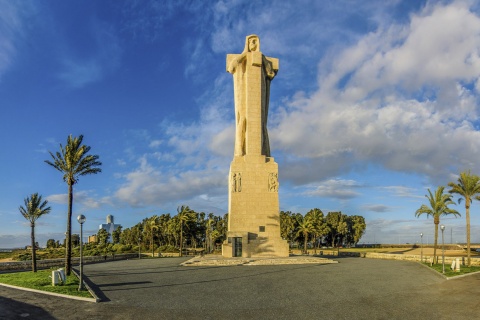 Monument to Colón in Huelva

More than 2,500 years ago, Huelva - the most westerly Andalusian capital - was the centre of the Tartessan civilisation and an important commercial enclave which maintained intensive trade with other ports in the eastern Mediterranean.

Centuries later it became a base for Phoenicians, Carthaginians and Romans, although it was the latter who began to exploit the area's enormous mineral resources, an activity which has continued throughout the centuries. With the Roman presence in the area, the city, known as Onuba Aesturia and set in the region of Beturia, took on great importance and even minted its own coins. During the Visigothic period the neighbouring town of Niebla (Elepla) took on great civil and military importance in the county and even became an episcopal see. The arrival of the Arabs in Huelva in around 713 meant a new era for the city, which came to be called Welba. During this new period, the city came to be, for a time, an independent Taifa kingdom under the Bekries dynasty. However, it was not until the second half of the 13th century when Huelva and its surroundings were conquered by the Christian King Alfonso X el Sabio (the Wise). In the middle of the 15th century the whole area came to belong to the ducal lordship of Medina-Sidonia, a situation that continued until the middle of the 19th century. But the historical event that has undoubtedly left the greatest mark on the people of Huelva was the discovery of America, as, in 1492 Christopher Columbus undertook the first of his voyages to the New World from these lands. At the monastery of La Rábida, a few kilometres from Huelva, Friar Juan Pérez and Friar Antonio de Marchena promoted Columbus' plans for his voyage and he stayed there until just before he set off. As a reminder of this period, in 1929 the Fe Descubridora monument, one of the symbols of the city, was erected at Punta del Sebo. This large sculpture, the work of the American sculptor Whitney, is a tribute to the figure of Columbus and the important role the province of Huelva played in the discovery of America.

One of the most important religious buildings in Huelva is the Cathedral of La Merced (18th C.). The cathedral began as the church of the Convent of La Merced, founded by the Duke of Medina Sidonia in 1605. The Cathedral, which has a three-nave plan, was restored in the 18th century. A group of chapels and Baroque reredoses are hidden behind its splendid façade. It also houses the Pantheon of the Counts of Niebla. Meanwhile, the convent, which lost its original function after Mendizábal's church land sales in the 19th century, had various civil uses until the present day, when it is a university. In the oldest part of the city centre is the church of San Pedro. This was built in the 16th century in Gothic-Mudejar style on the remains of an old mosque. The building consists of three naves separated by series of arches, and a polygonal apse. The church of La Concepción, the second parish church built in the city, originally dates from the 16th century, a period from which it preserves some Gothic elements, like the vault of the main chapel However, its current seventeenth-century appearance comes from its later restoration. Inside, the church houses various paintings by Francisco de Zurbarán dedicated to La Inmaculada. The Plaza de las Monjas is right in the centre of the old part. Beside it, appear typical streets and squares like that of Alcalde Coto Mora. To get a panoramic view of the city and the River Odiel estuary you have to leave the built-up area and climb up to the El Conquero viewpoint. On this hill is the sanctuary of Nuestra Señora de la Cinta. To this 15th century building were added later restorations that altered its Gothic appearance. The sanctuary has three naves built in brick and, in the centre, it preserves a Mudejar-style horseshoe arch. Inside it is presided over by a mural painting in which the city's patron saint is represented. Huelva's long mining tradition is reflected in the Reina Victoria district, formed by English-style houses built at the beginning of the 20th century by one of the large British mining companies that set itself up in the city. Other interesting civil works are the Casa de Colón and the Mineral Wharf. The former dates from 1883 and was opened as a luxury hotel where the events celebrating the 4th centenary of the Discovery of America were held. The complex consists of four buildings in Colonial and English style and large gardens. For a time it was the centre of social life in Huelva. Meanwhile, the Mineral Wharf is a reflection of the intense mining activity carried out in the area. The construction, opened in 1876, is situated at the mouth of the River Odiel and enabled minerals to be brought by railway from the Riotinto mines and loaded on to ships. To get to know the city and its province, the Huelva Provincial Museum displays a collection of objects from the Roman period. Meanwhile, in other rooms in the museum complex, the history of the Riotinto mines is explained, along with the importance of the province in the discovery of America.

The time of Columbus in Huelva and the province is remembered every year through a calendar of events and festivals making reference to the lands on the other side of the Atlantic: the Colombina Festivals, the Ibero-American Festival at La Rábida, the Ibero-American Film Festival or the events of 12 October, Spanish national day. The province of Huelva offers a great variety of opportunities for tourists. A few kilometres from the provincial capital is the monastery of La Rábida (14th C.), where Christopher Columbus stayed just before leaving, and the port of Palos de la Frontera, from where he undertook his first adventure. For those who prefer sunbathing, Huelva has some of the best beaches on the Andalusian coast, like Punta Umbría, Isla Cristina and the important tourist centre of Matalascañas. Within the wide range of hotels on the coast, the Paradors at Ayamonte and Mazagón deserve a mention. Another option is to visit the Doñana National Park, one of the most important an unusual ecosystems in Spain which has also been declared a World Heritage Site. The best-known product from the province's cuisine is Huelva ham, recognised with its own Denomination of Origin. Inland, excellent quality sausages are also produced. On the coast, fish and shellfish are typical. They are the basis for tuna with tomato or onions, clams with rice, sea bass with rice or "chocos" (cuttlefish) with rice and broad beans. Strawberries and citrus fruit are produced on the coast, while pastries include the delicious "coca de Isla Cristina" (made with egg, almonds and candied pumpkins strands) or "hornazos" and "pastelillos de Mogeur". The county Condado de Huelva gives its name to the Denomination of Origin under which this province's wines are labelled. 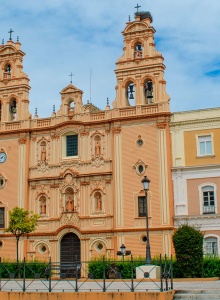 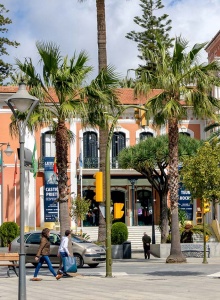