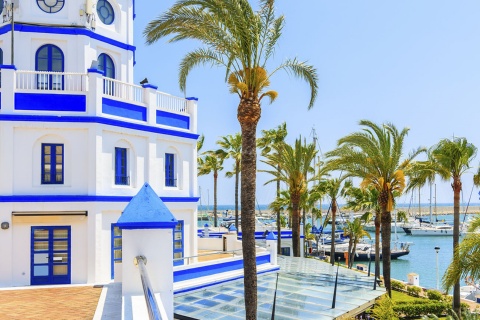 Estepona, on the world-famous Costa del Sol, conserves all the charms of a typical Andalusian town, with its peaceful squares bedecked with colourful flowerpots and little white houses. It is also a holiday resort offering all the latest modern amenities, golf clubs and sporting and recreational areas.

Its 21 kilometres of coastline are home to a number of beaches that have been awarded the European Blue Flag. Highlights include the areas along the seafront promenade and the marina (which every Sunday is the site of a street market offering traditional products and arts and crafts). Right in the centre is the beach of La Rada, the perfect place for a dip.

The lovely old town centre fits the classic image of Andalusia, with restored streets of whitewashed houses, crowded with pots of bright flowers. There are several art routes around the town, such as the Murals Route, with over 40 works of art, the Sculpture Route, with over 30 pieces by different artists, and the Poetry Route, with works in several languages. Notable buildings include the Clock Tower, the 18th century church of Los Remedios, and the former San Luis Castle. Also worth a visit are the megalithic necropolis of Corominas, the original bullring, the Plaza de las Flores, Casa del Aljibe (home of the Archaeological Museum), and the Botanical Gardens and orchid house.

Nature lovers will enjoy a side trip to the Sierra Bermeja natural park, where they can climb the Pico de los Reales (1,449 metres) for views over the western Costa del Sol, the Rock of Gibraltar, and the north coast of Africa. Estepona is also home to several golf courses, the Costa del Sol School of Equestrian Art, and the Selwo Aventura leisure park, where over 2,000 animals live side by side in semi-freedom. Another worthwhile excursion just a few kilometres away is to Manilva, which has seven kilometres of beaches along its coastline. Nearby is the historic-artistic site of Casares, presided by the church of La Encarnación and the Torre de la Sal tower. Continuing on along the coast you'll come to Marbella, one of the most important holiday resorts on the Costa del Sol, and Fuengirola, a town boasting a profound Andalusian heritage with magnificent beaches.