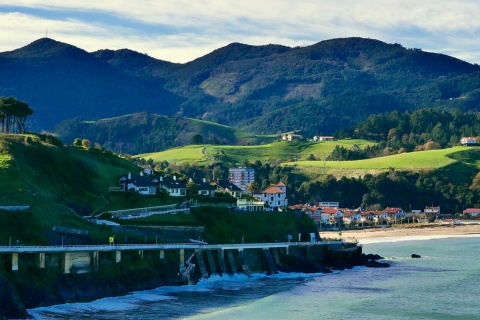 Deba is an important holiday destination. The church of Asunción is one of the most interesting places in town, from a cultural standpoint. This Gothic temple was declared a National Monument.

Deba represents traditional tourism from the most positive perspective: "as an escape from overcrowded cities, in search of peace and quiet". The sea and the mountains offer a wide variety of leisure and holiday activities.

The municipality of Deba has three urban centres: Deba, Itziar and Lastur, plus some 130 hamlets scattered around its territory. The village of Deba, located on the right bank of the Deba estuary, has a big and beautiful beach. On Lersundi street we find the magnificent façade and atrium of the church of Nuestra Señora de la Asunción, a Basque Gothic temple from the 16th century, with a beautiful cloister of the same style. The Baroque City Hall is another noteworthy building. In addition to the civil and religious patrimony, Deba also has a rich archaeological heritage, specially in the caves of Ekain, Ermittia and Urtiaga. The most important fiestas in Deba are the festivities of San Roque, the town's patron saint. These are celebrated between August 14th and 20th. The beginning of the celebration is quite interesting, as well as the drum circles, the running of the bulls ("encierros"), the bullfights with young bulls and novice bullfighters ("novilladas"), the traditional dances, and the "verbenas",or open-air parties.