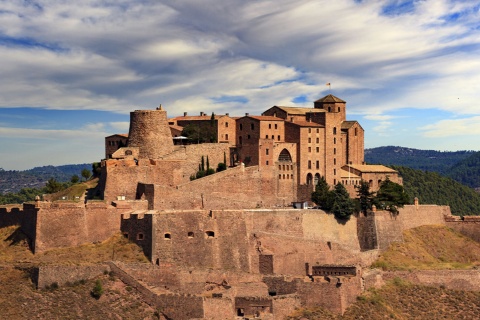 Located in a valley in central Catalonia, on the banks of the Cardoner river, Cardona is a picturesque site with an important mediaeval heritage.

Its most outstanding features include the walled fortress in its castle, set on a hill, and the foremost example of the Catalan Romanesque style of architecture. It was shortlisted in the European Commission's EDEN programme (European Destinations of Excellence), in recognition of its sustainable tourism proposal. Cardona, located in the region of El Bages, is heir to an important mediaeval past which began in around the 8th century with the construction of its castle-palace-monastery. The streets of the town take us back to a time of Romanesque and Gothic constructions. One of the most emblematic structures in this town is its 9th-century fortified enclosure, today restored for use as a Parador hotel.

The most representative elements of the Catalan Romanesque style to be seen throughout the area can be found in the mediaeval castle. The palace, which stands within the walled enclosure, has a ducal courtyard and a large hall with pointed arches. The Torre de la Minyona tower is one of the key elements of the site, together with the chapel of San Ramón Nonato, which conserves various Romanesque and Gothic elements. The castle's greatest treasure is the collegiate church of San Vicente, an outstanding Romanesque church dating from the 11th century, whose central nave has a height of almost 20 metres. The town of Cardona is also home to interesting places such as the street known as the Calle Major, the Plaça del Mercat square and the church of Sant Miquel. It is also well worth visiting the Montaña de Sal cultural park beside the town; this site was a runner-up in the European Commission's EDEN programme (European Destinations of Excellence), in recognition of its sustainable tourism proposal. The area around Cardona offers a range of possibilities for excursions. Typical farmworkers' houses and old farm buildings can be seen along the route to the Cadí-Moixeró nature reserve. Nearby, the waterfalls along the Llobregat river create a landscape that lingers in the traveller's memory.