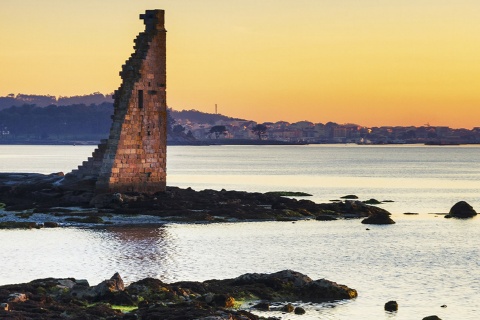 Located right on the Ría de Arousa, Cambados is considered to be the capital of Albariño, one of the best white wines of the world. Its historic quarter has the Property of Cultural Interest designation and it is home to one of the most important groups of nobility pazos in Galicia.

Cambados should be seen on foot to truly enjoy it. It holds the Very Noble Village title, and that nobility can be appreciated in its monumental heritage; for example at the Santa Mariña ruins from the 16th century, or at the Fefiñáns square, flanked by the pazo de los Figueroa and the San Bieito church of the 16th century.

Other interesting pazos are Montesacro and Bazán, currently a parador (luxury state-run hotel); and also the Counts of Maceda Palace, a medieval construction that was reformed in the 17th century, and the Chariño-Sotomayor Palace. Cambados has a soothing landscape, characterised by tall vine trellises where the grapes for Albariño and Espadeiro wine ripen. The Albariño festival has been declared a National Tourism Interest and is celebrated the first Sunday of August: along with abundant folkloric displays, there are tastings of this wine, whose original name is Rias Baixas and that enjoys a well-deserved global prestige.