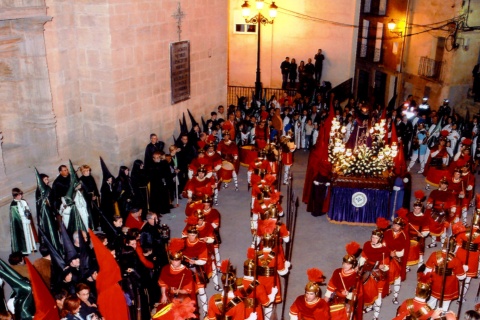 Andorra, in the province of Teruel, is one of the nine villages that make up the Route of the Tambor and the Bombo (drums).

During the Easter week celebrations, the sound of drums can be heard in every corner of these villages in the south of the Aragón Region. The most long-awaited moment of the celebration in Andorra is the “rompida de la hora” (breaking of the hour), at midnight of Maundy Thursday/Good Friday. Thousands of these drums come together in Plaza del Regallo Square and, at midnight, they begin to beat in unison, filling the night with an unmistakable sound. A few hours later, long lines of people with drums make their way up the mountain to San Macario Shrine, to pray in complete silence, with the light of flaming torches. At dusk on Friday the Santo Entierro procession is held. The sound of these instruments accompanies the religious images through the village streets in a very emotional event.