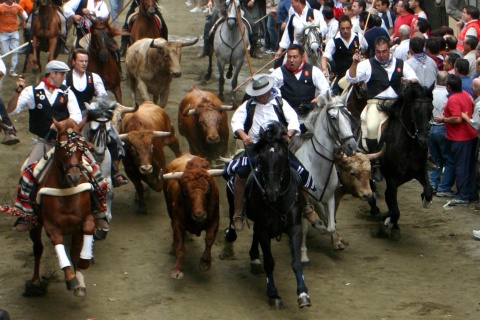 You can see this exciting spectacle during the patron saint’s fiesta in Segorbe. Various riders skilfully guide a heard of bulls through the crowd.

Excitement and risk go hand in hand at this unique, spectacular celebration, which brings thousands of people to the village of Segorbe year after year. The Droving of Bulls and Horses takes place during the second week of the patron saint’s fiestas in Segorbe. This traditional act, whose origins date back to the 14th century, takes place at 2pm every day during the week (Monday-Sunday).

A rocket is fired off at exactly two o’clock, marking the start of the droving in Calle del Argén street. When the herd of bulls gets to Plaza de los Mesones Square, a group of daring riders collects them and surrounds them with their horses, to guide them to the bullring in a fast, dizzy race that lasts barely two minutes. The route runs some 500 metres along Calle Colón Street. The crowds of spectators do not get in the way. The sea of people opens and closes, creating a moving passageway as the bulls move forward. On their way, those in attendance reward the courage of the riders with jubilant shouting, in the midst of an amazing atmosphere. The programme of the fiestas is completed by numerous acts such as open-air celebrations, concerts, competitions and fireworks. 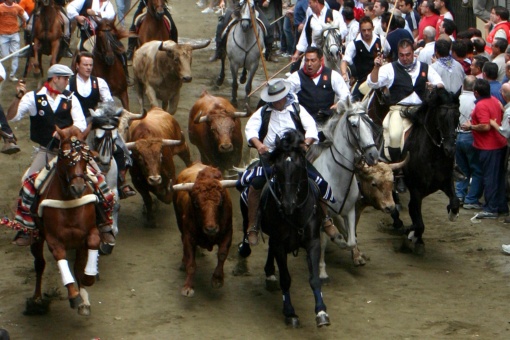