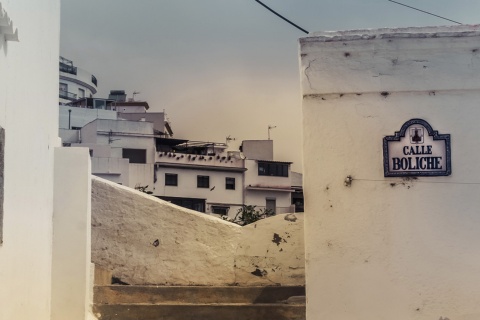 The town of Salobreña in the province of Granada lies at the foot of a Hispano-Muslim castle on the so-called Costa Tropical on the shore of the Mediterranean Sea.

Its long beaches and pleasant temperatures make it an ideal all-year-round destination. The sugar cane and tropical fruits that grow here mix with fish and shellfish from the area to create mouthwatering recipes. From here, travellers can enjoy many coastal towns suitable for practising water sports and outdoor activities.

Salobreña's wonderful location has given it excellent beaches, where many tourist complexes are set. Its varied range of hotels and leisure is completed by an interesting historic quarter with whitewashed façades arranged around its Arab castle. Salobreña's origins go back to the Phoenician period. Founded as a trading colony, it was also settled by Romans and Arabs until it was reconquered by the Catholic Monarchs. Pirate attacks made the town build a wall and its inhabitants chose safer places in the mountains. Nowadays, its excellent tropical climate, with temperatures between 15 and 32 degrees, attracts visitors all year round. Old TownThe higher part of the town centre is dominated by a castle built on rocks. Walls of brick and masonry, large towers and the Keep form part of the silhouette that dominates the houses of Salobreña. Built by the Romans, it was the Arabs who extended this defensive construction. At the foot of the Gran Peñón, on which it stands, are the streets with whitewashed façades so much a part of the Muslim tradition. Another interesting building is the parish church of Nuestra Señora del Rosario, built in the 16th century on the site of an old mosque. The different districts of this Granada town, like La Loma, La Fuente, El Brocal and el Albaycín, have medieval corners with openings for doors, arches and windows. A walk around the area gives travellers an idea of what this place was like in far-off times. The Promenade, between the orchards where many fruit trees grow and the coast, is another good option for getting a little closer to the culture of Granada. Meanwhile, on Salobreña's beaches, travellers can practise a wide variety of water sports and outdoor activities.CuisineShellfish and fish fill this town's table and to them are added products from the orchards and fields. Potatoes with shark, seafood soup, "migas de pan" (dish based on breadcrumbs)... serve as starters for pickled blue fish, dried octopus or skewered sardines. Among the desserts, cakes from the Arab tradition and exotic fruits like papayas, avocadoes, guavas, mangoes and custard apples are outstanding.The surroundings of Salobreña offer us interesting summer holiday places like Nerja (with Parador de Turismo), Motril (excellent beaches and golf courses) or Adra, which also has a Phoenician origin. Right in the Granada Alpujarras, the Spa at Lanjarón offers its medicinal waters to anyone who wants to relax there for a few days. Nearby are the more than 3,000 metre high summits of the Sierra Nevada and its National Park. A multitude of routes cross this protected area, while the natural park has a ski station open throughout the snow season. Also awaiting you is the provincial capital, Granada. Its Arab flavour is palpable in the palaces and buildings of the Alhambra, the Generalife and the Albaicín district, all declared a World Heritage Site by UNESCO.