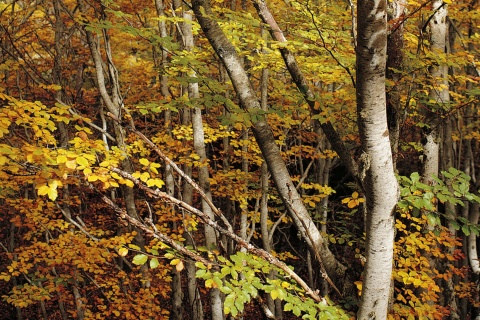 A vestige of times passed

The beech trees of Tejera Negra were planted in remote times, when the climate was colder and more humid than it is now. Nowadays, these trees find shelter in shady valleys and northern slopes, with fog, wind, rain and very little sun.

Hayedo de Tejera Negra Nature Reserve is situated to the north-east of Guadalajara province, in the township of Cantalojas. It is delimited by the rivers Lillas and Zarzas. The Reserve's microclimate, together with its isolation, has enabled the preservation of the beech groves which give it its name. Apart from the beech trees, you can encounter other protected species, namely the yew, holly, birch, oak , hazel or pine. The undergrowth consists of heather, broom and thickets. The most characteristic fauna of Hayedo de Tejera Negra are the daytime birds of prey: golden eagle, red kite and goshawk. Roe deer, the fox, wild cat, marten, badger, weasel, wild boar and nocturnal birds of prey, for example the tawny owl, long-eared owl and little owl abound.