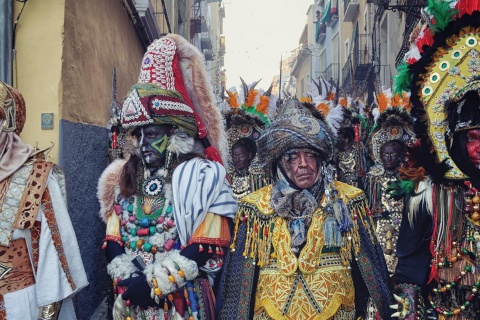 For eight days, the whole town steps back in time to hold a spectacular re-enactment of a battle fought in 1538.

The festival of Moors and Christians is the biggest event of the year in Villajoyosa. The festival has been held for over 250 years in honour of Santa Marta (St. Martha) and commemorates events which occurred in 1538, when Berber pirates led by Zalé-Arraez tried to attack Villajoyosa. According to legend, St. Martha came to the rescue of the townsfolk by causing a flash flood which wiped out the enemy fleet, thus preventing the corsairs from reaching the coast. To show their gratitude, the town made her its patron saint and hold this annual festival in her honour, the main event being a re-enactment of the Moorish landing.

The festivities commence with the fabulous processions of Moors and Christians on 25 and 26 July: The various factions that make up each procession march majestically through the streets to the sound of music. Then, in the early hours of the 28th, the spectacular landing is held. Crowds of people start to arrive at the beach around five in the morning and, while the Christians make ready their artillery to defend the shore, over 30 Moorish vessels approach the coastline. Once they have landed, both armies battle it out until they reach the foot of the castle, which is eventually taken by the Moors. In the afternoon, the Christian soldiers come back and retake the castle: first of all, they try to persuade the enemy to surrender, but after some unsuccessful negotiations, a great battle ensues ending in the defeat of the Moors, who are symbolically sent back to the sea.

Villajoyosa is brimming over with fun and merriment during these festivities. There are also many activities to enjoy, such as gastronomic competitions, open-air dances, firework displays and music concerts. Moors and Christians is a popular festival in many parts of Spain and each place has its own original way of celebrating, depending on their particular history and tradition. The re-enactment of the landing is unique to Villajoyosa and sets it apart from all other festivals of its kind.