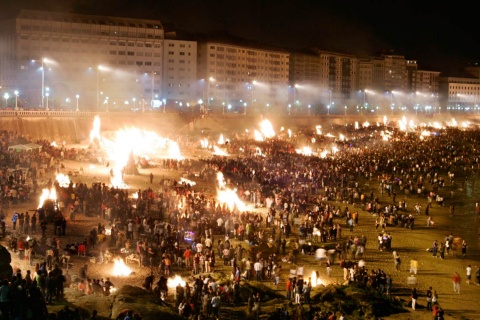 A Coruña , in the Region of Galicia, becomes one huge bonfire to celebrate the arrival of summer on the night of San Juan.

Different activities related to this fiesta get underway as early as May, and throughout June there are a large number of cultural, social, sporting and traditional events. Chamber music concerts, recitals, exhibitions, ballet and regional dances can be seen at customary locations around the city. The long-awaited day, however, is 23 June. Over the course of the day there are successive parades and street performances with music bands, bagpipes and traditional dances, as well as groups of “giants and big-heads” that fill the streets of A Coruña with colour, joy and festive sounds. Plaza de María Pita Square is the stage for a musical festival, and the smell of roasting sardines fills the whole city at dinnertime, with a multitude of “sardiñadas” on the streets of its many neighbourhoods.

Little by little, as night falls, hundreds of bonfires are lit, although it is on the beaches of Riazor and Orzán where the fiesta is at its most spectacular. At midnight, the colour of the flames can be seen reflecting in the waters of the Atlantic Ocean: the “noite da queima” (night of flames) has reached its zenith and an immense bonfire erected here two days before is lit. It is common to see many people carrying out the traditional ritual of a purifying swim in the waters of Riazor. The sky fills with fireworks and the fiesta moves onto the streets of A Coruña, lasting well into the early hours.