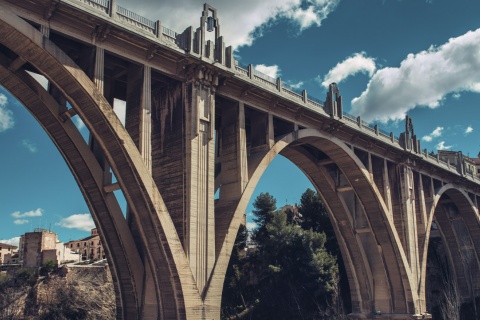 Alcoy is a Mediterranean city in an attractive natural setting flanked by two nature reserves, the Serra de Mariola and Font Roja.

It is located only 54 kilometres from Alicante and 105 from Valencia. It has an outstanding mediaeval and Modernist heritage, and its emblematic bridges.

Plaza de España square is the heart of the city. Places to visit in the mediaeval quarter include the old town hall, the Archaeology Museum, and the Museum of the Moors and Christians festival. Going up along Calle San Nicolás in the opposite direction brings you to the Modernist city. The town's appearance today directly recalls the pioneering city of the Spanish Industrial Revolution whose artistic heritage has been included on the European Modernist Route. Buildings like the Casa del Pavo, the Círculo Industrial, the old fire station and the Conservatory of Music and Dance –as well as examples of industrial architecture including the old Papeleras Reunidas and Ferrándiz y Carbonell buildings– are all well worth a visit. Another interesting attraction is the Alcoy cemetery, featured on the European Cemeteries Route. Visitors should not leave the city without sampling its delicious gastronomy: "bajoques farcides", "borreta", "olleta alcoyana" and "pericana", in addition to its famous "peladillas", "torrats", "pinyonets", sugared walnuts and "pasteles de carne y gloria", "herbero", coffee liqueur, "picadetes" and small plates of appetisers. The area around Alcoy offers the opportunity for excursions along the cycling route known as the Vía Verde (green route), the Barranc del Cint, El Salt, Els Canalons and Racó Sant Bonaventura, all ideal for adventure sports. Tradition dictates that based on the historical facts of 1276, on 22, 23 and 24 April Alcoy celebrates its Moors and Christians festival in honour of its patron saint San Jorge. Music and wild flights of imagination transport us back to the 13th century to relive the Battle of Alcoy. 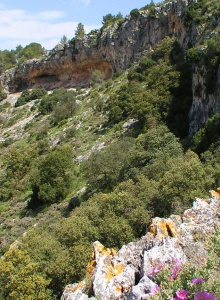 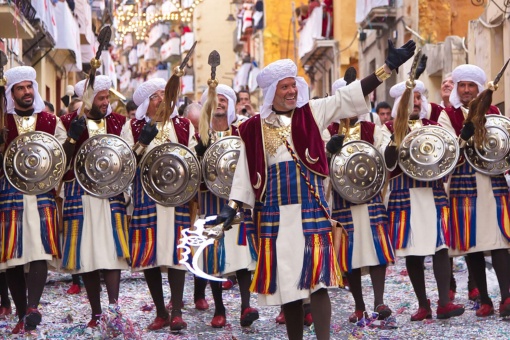