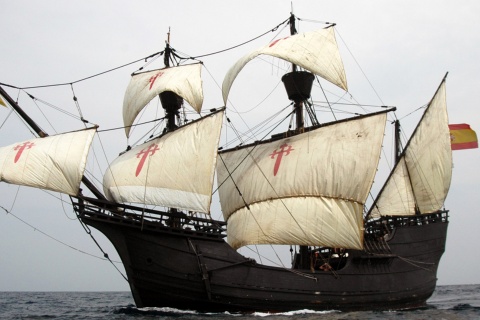 It was the first great global event. The expedition of Fernando de Magallanes - Magellan - and Juan Sebastián Elcano set out from Seville in 1519 and ended in 1522 after circling the globe. Spain is commemorating it with a programme of exhibitions, concerts, conferences and even a tour of various ports in a ship like the ones that first sailed around the world.

Spain was the starting point of a voyage which would take three years and become a historic milestone. Five ships, with a crew of over 230 men, began a voyage to the Spice Islands (part of what is now Indonesia) in search of new routes, which ended in 1522 after they had sailed all the way around the world.

Spain will mark the occasion with special events from 2018 to 2022. The events will be especially important in the ports where the voyage began (Seville and Sanlúcar de Barrameda), their stopping place in Tenerife, and the city of Valladolid, where King Charles I of Spain gave Magellan his consent for the expedition. Programme of commemorative activities Over the next three years there will be around 200 cultural activities of every kind, from exhibitions and lecture series to concerts, plays, dramatised tours and workshops for children. Some of the most notable cultural events include the travelling exhibition “The Longest Voyage”, organised by Acción Cultural Española and the Archivo General de Indias, and the Naval Museum exhibition “We Were the First. Magellan, Elcano and the Voyage around the World”, which will examine the importance and international impact of that great adventure. In the performing arts, one highlight will be the large-scale show “Sphaera Mundi” by La Fura dels Baus, which will travel around the world itself on the ecoship Naumon, or the debut of the opera “Magallanes: no hay rosas sin espinas”. Replicating the original route Of course, there will also be maritime events, such as an homage in Sanlúcar de Barrameda to the sailors who took part in the expedition, featuring the replica of the Victoria. This ship will be the ambassador of the 5th Centenary on a promotional tour of the harbours of different cities with educational activities that explain the achievements of Magellan and Elcano. The replica of the Victoria will not be the only ship launched. The PROS, a 21-metre yacht belonging to AGNYEE (Association of Friends of the Great Spanish Sailors and Explorers) will set off from Seville to replicate the journey and the route of the first voyage around the world, on a three-year trip calling at the same places where Magellan and Elcano passed 500 years ago.